Ireland, No country for women? 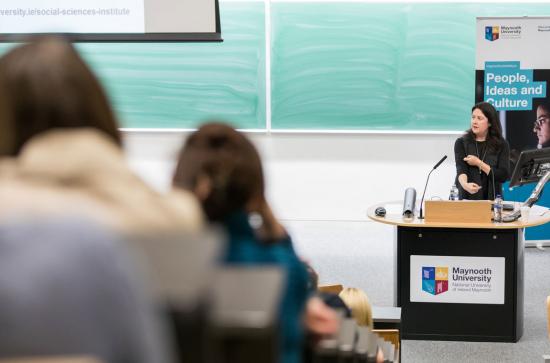 The Minister for Health introduced the Regulation of the Termination of Pregnancy Bill in the Dáil, which seeks to legalise abortion services in Ireland this week. This was a historic occasion undoubtedly in a State and society that has demonstrated a deeply troubled relationship with women who fall pregnant outside of marriage by institutionalizing or criminalizing women. "Today we begin the job they have given us, of making the law that follows the repeal of the 8th Amendment and after 35 years in our Constitution, in doing so, we are also making history," he said.  The minister said history was made in the streets, in homes and in ballot boxes across the country by people, including politicians, who had campaigned "steadfastly for years".

History was though already being ‘made’ in the arena of reproductive rights long before the 8th was introduced in 1983, both in a campaign for reproductive rights that had begun much earlier and through the silent, secretive actions of many thousands of Irish women who got themselves ‘into trouble’ as it was termed. Abortions were provided illicitly in Ireland as documented in court prosecutions throughout the twentieth century and infanticide was commonplace. Over 100 Irish women were estimated to be dying annually from unsafe backstreet abortions in the 1930s for instance. Extra marital or unwanted pregnancy remained for decades a matter that was swept under the carpet or exported to be dealt with in the UK. The legalizing of abortion in the UK in 1967 in an effort to abolish risky ‘backstreet’ procedures combined with the mobilization of a second wave feminist movement demanding abortion rights in several countries were destined to provoke controversy and activism in Ireland. Although initial energy in feminist and liberal reproductive rights campaigns in Ireland from the early 1970s went into securing the legalization of contraception first, the right to free, safe, legal abortions was already a core stated demand of the feminist group Irishwomen United by 1976.

The relative ease of passage to the UK for a medicalized abortion was undoubtedly a game changer for Irish women seeking a safe alternative to illegal abortions but the dangers to women not in a position to travel became all the more apparent. Numerous reproductive tragedies and abortion have dominated Irish political debate since the 1980s. The death of fourteen-year-old Anne Lovett in childbirth alongside her stillborn baby in a grotto in Co. Longford in 1984 was a profound event. Joanne Hayes, a single mother, was falsely accused of a double infanticide in a tribunal of inquiry into what became known as the ‘Kerry Babies’ case in the same year. The right to life of the unborn was protected by Article 40.3.3 of the Constitution introduced in 1983 but in reality its existence profoundly impacted women whose lives were at risk in Irish maternity hospitals because of their pregnancy. Individual women impacted by reproductive injustices have also been the subjects of a range of litigation in both Irish and international courts on abortion in Ireland. In the case of A, B and C v Ireland in 2010, for instance, the European Court of Human Rights found that Ireland had violated the European Convention on Human Rights by failing to provide an accessible and effective procedure by which a woman can have established whether she qualifies for a legal abortion under Irish law. A number of cases related to whether an abortion was permissible in cases of fatal foetal abnormalities were taken.

Irish abortion law received worldwide attention when Savita Halappanavar died in 2012. She requested and was denied an abortion in an Irish maternity hospital while suffering from septicemia during a miscarriage. Savita’s death was a key turning point and brought thousands of protestors onto the streets, including a new generation of young women that campaigned extensively during the May 2018 referendum. The focus of the debate had shifted from the rights of mobile women forced to discontinue their unwanted pregnancies in the UK to the 8th being a life threatening risk to pregnant and immobile women in Irish maternity hospitals.  The constitutional and legislative abortion provisions subsequently discussed democratically at a series of Citizen’s Assembly meetings in 2016 and 2017 and at a Government appointed committee in 2017 which recommended substantial reform. The government proposed the 36th Amendment of the Constitution Bill in order to replace the current provisions of Article 40.3.3 with a clause allowing legislation regulating the termination of pregnancy.

The 36th amendment will decisively repeal the 8th. But the concealed stories of many thousands of pregnant Irish women will endure, having been buried, denied and silenced for decades. The story of P in December 2014 demonstrated the chaos that resulted from the 8th amendment, which the courts confirmed served to deny women and their families autonomy, consent and dignity in the case of maternal death prior to child birth. P was pregnant and kept on a life support machine to deleterious effect and against the wishes of her family because of the 8th amendment to the Constitution; the details of the case were harrowing.

Irish Times journalist Michael O’Regan commented in response the State apology to Joanne Hayes in 2018 that Ireland was ‘riddled with misogyny’ in the 1980s. Nell McCafferty has referred to the divisive 1980s that witnessed referenda on abortion and divorce as a civil war. The Scally Report recently suggested women’s reproductive healthcare is characterized by ‘institutional misogyny.’ The legacy of the Irish civil war of the 1920s is obviously a critical issue in centennial Ireland. But the unequal and at times barbaric treatment of women in Ireland in the last 100 years has also created a legacy that must be fully considered in the decade of centenaries if Irish society is to arrive at a full and mature appraisal of its history and performance as a nation – equally and as controversially.Professor Linda Connolly, Head of the Maynooth University Social Sciences Institute discussed this in her lecture, Ireland: "No Country for Women"?, 09 October, as part of the University’s 2018 series of Professorial Lectures.