The Department of Sociology offers a BA in Sociology and a BA in Politics. This page provides general information on our undergraduate programmes. Below you will find course descriptions, handbooks, timetables and further information. Please read the information carefully.

For information on teaching and learning formats in 2021/22, university and department contacts, and tips on technology use, please go to our Blended Learning Hub page.

For details on our international education including outgoing and incoming exchanges, please see our International Education page.

Our graduates are critical and creative thinkers who make a contribution in many different walks of life - from teaching and politics, to the media and business. Check out our Careers and Graduates page to find out more about where our graduates end up and listen to some of our graduates share their experience at Maynooth Sociology in the Undergraduate Testimonials and Achievements section below.

The Sociology degree is organised around three major strands, or different kinds of courses:

Each year of the Sociology degree emphasizes a crucial aspect of learning and doing Sociology:

You may study Sociology through BA Arts or BSc in Social Science.

Wondering what sociology is all about? We have put together some information in our about us pages  and we have a list of staff books available so you can see the issues we research and write about.

Well known sociologists? - Rev. Martin Luther King, Robin Williams, Michelle Obama and our own President Michael D. Higgins. For foundational and contemporary sociologists you might be reading during the course see here.

Professor Mary Corcoran gives an overview of our BA Sociology:


Professor Seán Ó Riain gives an overview for first year students on what they can expect from the BA Sociology in second and third years:

A key distinguishing feature of Politics at Maynooth is our focus on active citizenship. This includes, but goes beyond, the traditional study of parties and elections to include a much broader variety of aspects of politics (including public opinion, community activism, the media, NGOs, new social movements, trade unions etc.) and exploring the tensions between formal democracy, political power and social inequality. It also means providing opportunities for students to be active participants in their own learning on and off campus.

There are three interweaving strands:

We work to enhance the following core skills and values:

Professor Mary Murphy gives an overview of our BA Politics:


Professor Seán Ó Riain gives an overview for first year students on what they can expect from the BA Politics in second and third years:

Each year has its own handbook.

Third Year Sociology and Politics
Welcome and Overview of Third Year Sociology from Prof Mary Corcoran (just log in to Moodle when you click the link)
Short Intros to:
SO311 Development
SO312 Family
SO319 Revolutions
SO338 Sex, Law and Society
PO312 Poltiics and Gender Introduction

Please note that timetables are subject to change - the live version of timetables is available through Coursefinder.

These timetables are intended as a guide. Venues in particular are subject to change.

Timetables should be read alongside the module teaching formats available through our Blended Learning Hub page.

The purpose of the tutorial programme is to enable you to develop the skills needed to be a successful undergraduate sociology student.  The first-year sociology coordinator for 2021-2022 is Dr. Mary Benson.

Specifically, the small tutorial groups, led by experienced tutors, create an active learning environment to better understand the type of reading and writing that are involved in becoming a competent user of the language of sociology.  Critical reading skills go beyond memorizing the textbook and involve a selective reading of a wide variety of texts. Critical writing skills involve using evidence effectively, arguing successfully against other positions and placing your own original arguments in the context of what other people have already said on the subject at hand.

The tutorial program in first year consists of 16 workshop sessions for the year (8 each semester), delivered in small-group settings of about 20 students in each group.  Each of these sessions is meant to give you a combination of skills delivery and a workshop element relating to your first year course assessments for SO151 Contemporary Irish Society and  SO152  Sociological Imagination.

In each session you will be presented with the chance to identify and start developing a specific skill in relation to an assignment (essay/exam) that you are working on for these courses. As such tutorials are a key component in both of these first year courses.

The tutorial sessions are NOT meant to be time for tutors to teach you the content of these two lecture courses. Instead, tutors will use examples from the content of the course to demonstrate certain sets of skills to you. As always, if you have content questions about the course, feel free to contact the first year lecturer directly.

It is important that students understand how best to gather, manage, store and deal with data in their projects and thesis.

Here you will find the Department's  Revised policy on Research Ethics and Data Management .

Each year, third year students undertake a thesis project. It is a major piece of work and they meet weekly under the supervision of a member of staff.

With the permission of staff and students we also like to share some examples of the diversity and quality of student projects. Below are a selection of some of the undergraduate theses. 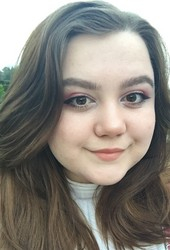 Abigail Shannon, a third-year Arts student double-majoring in English and Sociology, was selected as a participant on the MU SPUR 2020 Programme under the Department of Sociology/MU Social Sciences Institute for her project, K-pop Fans on Twitter – Tracking East/West Flow of Popular Culture. On completion of the programme, the Faculty of Social Sciences highly commended Abigail’s project which was mentored by Dr. Rebecca King-O’Riain.

SPUR is an active research based and paid experiential learning programme for successful undergraduate students who wish to learn more about the postgraduate experience and possibly pursue a career in research. The programme is held for six weeks during the summer and affords students the opportunity to work closely with faculty mentors on research projects across a range of discipline. Further information on the MU SPUR Programme can be found on the Experiential Learning Office website. 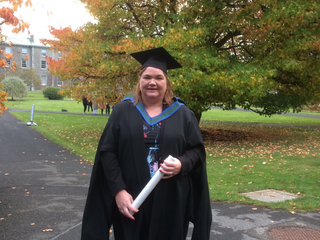 Majella Connolly, an adoptee from the St Patrick’s Mother and Baby Home in Dublin, was not afforded the opportunities to complete second-level education as an adolescent, nor to attend third-level education. It was later in life, after fighting and surviving an acquired brain injury, that Majella decided to return to education.
Majella first completed a Return to Learning course followed by a Bachelor of Arts in Sociology and International Development at Maynooth University. During her BA study, Majella worked as intern in the Maynooth University Access Programme Office and later became the Programme Advisor in the Programme Advisory Office.
Following completion of her BA in 2017, Majella continued her studies at Maynooth and received a Masters of Arts in Sociology in 2018. Her MA thesis, supervised by Professor Mary Corcoran, was completed on how identity formation has been impacted by the experience of adoption. In her thesis, Majella succeeds in giving a voice to the adoptee to illuminate the consequences in their everyday lived lives of the structural and institutional forces that shaped the adoption process in Irish society.
In the Spring of 2019, Majella delivered a testimony at the Trinity College Dublin Educational Access Conference on what success at college means to her. More recently, Majella remains an active campaigner in the debate about the Mother and Baby Home records Bill and has appeared in several news reports and outlets including RTE News, The Irish Independent and The Irish Times.
Majella is much to be admired, having overcome so many hurdles in her life with great courage, strength, and stamina. Her story is a true inspiration to all. 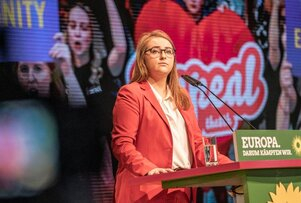 Síona Cahill graduated from Maynooth University with a BCL in Civil Law and Sociology in 2014. As a first-year undergraduate Sociology student, Síona won the McKevitt Memorial Prize for the best performance in the First Year Sociology Examination. The Longford native, is also the former Vice President of Maynooth Students’ Union and, the former President of the Union of Students in Ireland.
Throughout her studies and since graduating, Síona has remained an active campaigner, organiser and communications professional. She has led many campaigns on numerous social justice issues from, #MakeGráTheLaw (Ireland’s Marriage Equality referendum, 2015) to Students for Choice (Repeal of Ireland’s Eighth Amendment, 2018).
Síona was appointed to the expert group regarding issues of sexual consent on campuses for the Department of Education, and has previously sat on the steering group for the Irish National strategy for Women and Girls as well as working on the first National LGBTI+ youth strategy.
Síona was shortlisted alongside the internationally renowned Climate and Environmental Activist, Greta Thunberg, in the 'Women in Youth Activism' category of the Women in Europe Awards for her work on civic participation and voter registration. She also received an NXF GALA for her work on LGBTI+ awareness.
Nowadays, Síona is currently Head of Public Affairs and Communications at Gaisce - The President's Award. She is also a Non-Executive Director of the Dublin Rape Crisis Centre as well as the Irish Family Planning Association.
At the young age of 28, Síona has racked up a long list of impressive achievements and awards. She has been proactively involved in many equalities policy work as well as campaigning on different social inequality issues for numerous communities and marginalised groups. We are inspired by Siona’s passion for social justice and excited to see more of her exceptional work.

Dr Justine Horgan, senior researcher in the National Advisory Committee on Drugs and Alcohol (NACDA), died in August 2013. Justine was a Health Research Board staff member seconded to the Department of Health and worked as prevalence expert at the Irish National Focal Point to the European Monitoring Centre for Drugs and Drug Addiction (EMCDDA).  Justine completed her undergraduate education at NUIM in the 1990s and embarked on doctoral studies jointly between NUIM and the University of Groningen. She defended her doctorate at University of Groningen where she worked for a while before returning to Ireland in 2006.  With the permission of Justine’s husband, Dr. Peter Muhlau, we have inaugurated a new prize for the best final year project submitted as part of the degree requirements in the Department of Sociology.

The recommendation of the externs was that the prize be jointly shared by Michael Naughton and Edward Sugden.

Raymond Payne
Raymond Payne, a third year student in Sociology and Politics, received a 'Bram Stoker' medal in Nov. 2013 for the best overall student on the island of Ireland in the Media and Arts category of the Undergraduate Awards 2013.

Raymond won the award for his second year Media and Society essay for Dr. Aphra Kerr in the Department of Sociology titled ‘From an Agora to a Trojan Horse: Potentials of a Public Sphere from the Traditional to the Virtual and Back Again.’ His work was chosen as the standout entry in its category, from 32 institutions on the island of Ireland.

His essay was one of almost 4,000 pieces of coursework submitted to The Undergraduate Awards from 182 third-level institutions internationally in 22 disciplines. Founded in Dublin in 2008, the Undergraduate Awards is a pan-discipline international awards programme. Winning and highly commended students came from Harvard, Princeton, the University of Hong Kong and Maynooth University in 2014. See  Sociology R. Payne UG awards essay . 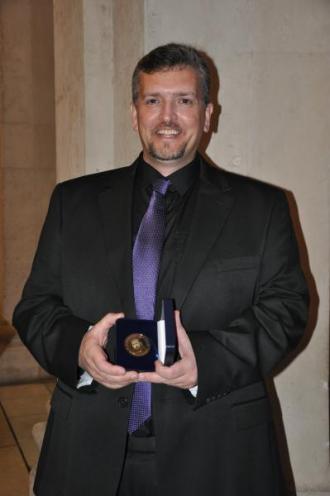