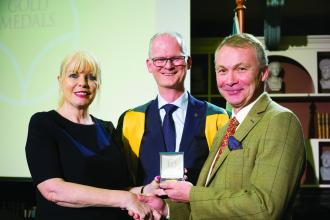 Minister of State for Higher Education Mary Mitchell O’Connor TD presented the Royal Irish Academy Gold Medal to Maynooth University Professor of Psychology and Social Inclusion Malcolm ‘Mac’ MacLachlan. The award recognises his outstanding contribution to the Social Sciences, and in particular, his research into how psychological, social and technological factors can be used to make society more accessible for all, especially to people with disabilities.
Mac MacLachlan is Professor of Psychology and Social Inclusion and Director of the ALL (Assisting Living & Learning) Institute.  He is also Research & Innovation Lead for the WHO’s Global Collaboration on Assistive Technology programme, and Knowledge Management Lead for the United Nations’ Partnership for the Rights of Persons with Disabilities.
He has worked as an academic, clinician, organisational consultant and policy adviser in Europe, Asia, Africa and South America; with national government and United Nation agencies, as well as in the private sector.
Professor Mac MacLachlan also won the 2018 British Psychological Society Award for Promoting Equality of Opportunity. The honour is given to psychologists who make an exceptional and sustained contribution to challenging social inequalities in relation to gender, race, ethnic origin, nationality, religion, sexual orientation, disability or age.