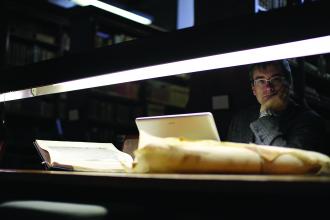 Professor Stifter was, in 2015, the first researcher ever to receive an ERC grant in the field of Celtic Studies, and one of the first ERC award winners in the broader field of historical linguistics.

Through his project Chronologicon Hibernicum (ChronHib), which is establishing a Probabilistic Chronological Framework for Dating Early Irish Language Developments and Literature, Professor Stifter has shown that it is possible to combine diachronic linguistics and medievalist scholarship with modern computational techniques, and has demonstrated the relevance of Old Irish as a significant subject of investigation within general linguistics.
Aside from his contribution to the study of Old Irish, Professor Stifter is also an expert in the field of Ancient (as opposed to Medieval) Celtic languages. He has edited a number of newly‑discovered inscriptions and was one of the first scholars to exploit the potential of interactive online databases for the lexicography of fragmentarily attested languages. As a result of this work he was invited to join the managing committee of the European research network AELA W (Ancient European Languages and Writing).
Since 2013, he has published 5 journal articles, 9 book chapters, 1 monograph and has edited one collection. During this time, he has also organised or co‑organised eight conferences and symposia at Maynooth.
Examples of recent publications include his Language of the Poems of Blathmac in 2015, which represents an important advance in the understanding of two eighth‑century Irish poems, which were only discovered in the mid twentieth century; and his 2016 study of the Metrical Systems of Celtic Tradition, was the first ever comparative study of poetic art in all ancient and medieval Celtic languages.