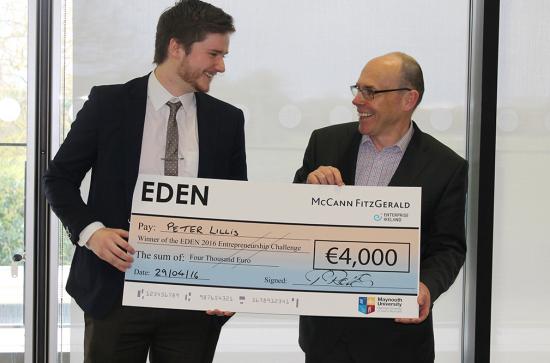 Concentration was so intense that even the wall clock sounded deafening in the Phoenix Boardroom at the Final of the Eden University Centre Student Entrepreneurship Challenge, last Friday afternoon, as the four finalists pitched their ideas to the panel of judges.  The ideas were sparkling and original and the judges were, justifiably, impressed by the quality and the novelty of the business ideas that were presented.

The judging panel was:

Four ideas had made it into the final, having been selected from an extensive list of entries in a tough semi-final the week before.  First up was a 3rd year Biology Student, Peter Lillis.  Peter’s big idea is a way to synthesise Kopi Luwak (and for those of you that haven’t heard of that, it’s the world’s most expensive coffee that sells for €75 a cup!).  Currently, Kopi Luwak is harvested from the faeces of the Civit monkey in Java. The coffee’s taste is so rich and attractive and its price so high that unscrupulous traders are starting to exploit and subvert the business just like the fur or ivory trade.  Peter’s idea will circumvent this unsustainable (and illegal) practice and will allow this fantastic coffee to be synthetically produced.

Second up is PhD candidate from Engineering, Iain Keaney.  Iain’s idea is called Uclid and it’s an application that enables a mobile phone camera take accurate measurements from photographs.  These measurements would be sufficiently accurate for preliminary architects’ drawings.  Iain had been a finalist in the competition two years ago and since then, not only has he completed his PhD, he has also won an enterprise competition with €10,000 prize fund.  Iain’s technology, when he gets it to market, has exciting and widespread application with opportunities from everything from photographing the ocean floor to working with drones in military operations to take measurements through photographs.

Daniel Brennan was the third contender, a Product Design student whose idea is around farm safety.  He proposes a small (and very cool) device to be attached to the boots of children when they are on farms. Using near field technology, the boots would alert both the child and their parents whenever the child had strayed near danger – for instance, if they went near the bull’s field or a slurry pit.  His mission with the project is to make accidental child death on farms a thing of the past and to reduce them to zero.  One of the semi-final judges, Catherine Whelan from FBD has already promised Daniel to introduce him to the FBD innovation team for whom this idea is aligned to their objectives on Irish farms.

Last up was Milad Alucozai representing a pharmaceutical start-up called Symmetry Therapeutics.  Symmetry have a promising new compound that can treat rare metabolic diseases but is also thought to have efficacy in obesity.  The business has already raised funds through Kickstarter and is very well connected in its home country of USA.  Milad is studying for his Masters in Maynooth.

When the presentations had completed, the judges retired to consider how to rank and evaluate them.  They had been supplied with some guidelines but the ideas were so thought provoking that they needed to talk them through – at some length.  The contestants sat nervously outside.

Eventually the decision was made; the contestants called back in to hear:

The judges made some extremely flattering comments and exchanged business cards with many future possible connections being made.  The final was videoed and you can see the whole thing here.

In the words of one contestant,
‘I believe the true value of the competition will echo through the careers of all the contestants. It certainly inspires an entrepreneurial spirit within the student body’.