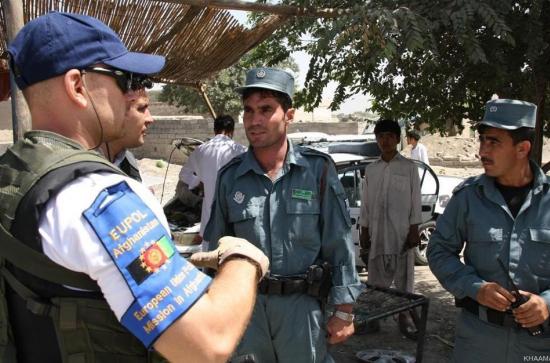 A team of four researchers from the Kennedy Institute,  Maynooth University will travel to Afghanistan this month for a field study that will provide new insights into Europe’s peacebuilding mission in the region.  The team will evaluate the role played by the European Police (EUPOL) in supporting efforts in Afghanistan to build a civilian police force and transition to peace.  EUPOL’s mission, which has been ongoing since 2007, is now due to cease.

The study is one of two for which researchers at the Edward M Kennedy Institute for Conflict Intervention at Maynooth University have been awarded European Union (EU) funding worth €300,000.  The Edward M Kennedy Institute submitted the proposals as part of an international consortium that includes civilian, research and military organisations with both projects potentially changing the way the EU handles conflict situations.

The mission to Afghanistan is part of a wider European project called Improving the Effectiveness of Capabilities in EU Conflict Intervention (IECEU), which started in May 2015.  The aim of this project is to analyse and evaluate previous interventions by the European Union in conflict situations in the Balkans, Africa, Middle East, and Asia, in order to assess how similar missions may be carried out more effectively in the future.  The IECEU Consortium consists of a multinational team of 11 partners from seven countries; Finland, Denmark, Slovenia, Ireland, Austria, Netherlands, and Belgium.

Following the trip, the team will submit a field study report to a special committee of EU, NGO, security experts, and government advisors.  The committee will then agree a set of recommendations for the enhancement of the EU’s capabilities for intervention in conflicts.

Speaking about the project, Prof Galavan, Academic Co-Director of the Institute, said: “Looking back over almost a decade of peacebuilding efforts in Afghanistan and the considerable investment made to that effect, the outstanding question is ‘Did Europe’s contribution help?’ If so, in what way?  If not, how can we do better?  By answering these questions we can re-orientate European policy focus towards what works and deliver significant improvements to future crisis intervention.”

Gaming for Peace, the second Edward Kennedy Institute project awarded Horizon 2020 funding, will develop an online gaming tool to train European diplomats, civil servants, and military forces in peacekeeping skills. The Maynooth team has accrued an exceptional level of experience through its work with European Security Defence College and Mediation Project courses held at Maynooth University. Participants in the courses taught at Maynooth University have the opportunity to role-play as an international mission to a conflict zone which must broker a peace agreement.

Representatives travel from all over the EU to attend these courses, which are taught by leading experts from across the island of Ireland. The online simulation is modelled on these role-playing activities, and the Edward Kennedy Institute’s role is to provide continuous input based on their experience and expertise.

Dr Kieran Doyle, Project Co-Leader and Edward M Kennedy Institute Programme Manager, explained: “At Maynooth University we have some of the world’s leading experts in the field of crisis resolution; but a finite number of spaces available on our specialist courses. The development of this online game, due to be completed by 2018, means everyone will be able to participate in the role-playing activity, which is designed to develop a participant’s insight into the diversity of perspectives encountered in a crisis situation. There is a real demand for this project in Europe and beyond, with the UN and other agencies part of its advisory board.”

Maynooth University President Philip Nolan welcomed the announcement: “This is a tremendous accomplishment for the team at the Edward M Kennedy Institute, and their success highlights Maynooth University’s standing as a leader in the field of conflict resolution. The Edward M Kennedy Institute is the destination of choice for the world’s leading experts in peacebuilding and crisis management, and a genuine force for good not only in Ireland but in conflict and post-conflict regions across the globe.”