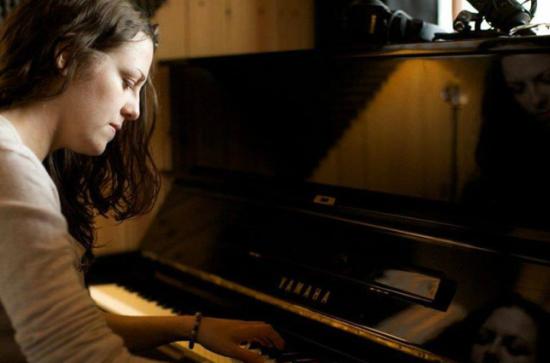 Saileog Ní Cheannabháin is a musician, singer and composer. A native Irish speaker, who grew up in Dublin, her sean-nós singing style is mainly influenced by singers from Iorras Aithneach in the Connemara Gaeltacht, where she spent a lot of time over the years. Her father Peadar is a sean nós singer from Connemara, her mother Úna Lawlor is a classical violinist and her siblings Eoghan and Muireann are also singers and musicians.
She plays Irish traditional music on fiddle, piano and viola, and also studied classical piano for twelve years at DIT, mainly with Shirin Tobin, and subsequently continued lessons at University College Cork, with Andrew Zolinsky and Tra Nguyen. Saileog had the opportunity to study many genres of music and experience and explore various approaches to music during her time at UCC. Having graduated with a BMus (2009), UCC awarded her the Seán Ó Riada Prize, for a study of the Songs and Singers of Iorras Aithneach. She has performed at various festivals and venues in Ireland and abroad, and has also featured on music programmes for TG4, Raidió na Gaeltachta, Lyric Fm, RTÉ Radio 1 and BBC Alba.
In 2012, Saileog released I bhfíor-dheiriú oidhche, an album of sean nós songs that were collected in the 1940s by Seamus Ennis, from various singers in Iorras Aithneach, Connemara. She did research work for the project Amhráin Ó Iorrus (2014), a compilation recording of songs from Erris, North Mayo, which were collected at the beginning of the last century. She has recorded a track with Ensemble Ériu on their debut album, and also features on the Tunes in the Church album.
Saileog's most recent album is Roithleán, an album of of Irish traditional music and sean nós songs, produced by Jack Talty, and released on the Raelach Records label. The recording also includes some of her own tune compositions. It features solo piano, fiddle, viola, and sean nós singing, as well as tracks with guest musicians.
One of Saileog’s recent projects includes arrangements of sean nós songs from Connemara and An Rinn, as part of a duet with Ailbhe Nic Dhonncha from An Rinn, Waterford. They also occasionally perform with other guests including Pádraic Keane and Eoghan Ó Ceannabháin.
In the summer of 2018, she composed, arranged and performed original music, in collaboration with Maitiú Ó Casaide, who also composed, arranged and performed original music, for the play Baoite, written and directed by Darach Mac Con Iomaire. The music was composed partly between both musicians, and partly in collaboration with sound designer Steve Lynch. Baoite was commissioned by the Abbey Theatre, and performed for ten days in An Taibhdhearc,as part of the Galway International Arts Festival 2018.
Saileog also teaches classical and traditional piano, traditional Irish fiddle and sean nós singing.