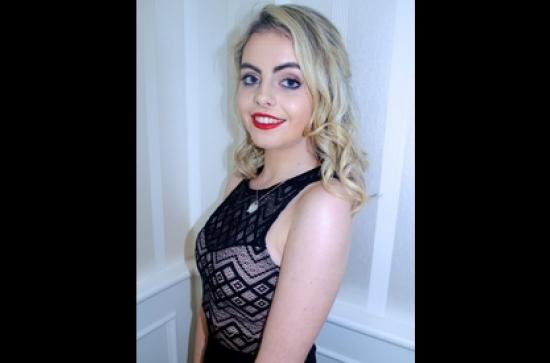 Megan is a 22-year-old soprano from Killarney, County Kerry. She is currently in her final year of the Masters in Music Performance Degree in the Royal Irish Academy of Music, studying with Professor Mary Brennan and répétiteur Andrew Synnott. Megan graduated with a Bachelor of Music Degree from Maynooth University, and received a First Class Honours. The former Maynooth University student has been very successful in competitions such as Feis Maitiu and the Feis Ceoil, where she was recently very highly commended in the German Government Cup competition. In 2016, she featured as a soloist with ‘Choir of the World’ Maynooth University Chamber Choir on their world tour, which consisted of venues in America and China. She was also a soloist at many events within Maynooth University, such as the Maynooth Annual Carol Service under the direction of Dr John O’Keeffe, as well as the Opening Academic Year Mass. She was also a member of the prestigious group Schola Gregoriana, led by Dr Darina McCarthy. She has been involved in masterclasses with Dr. Veronica Dunne, Miriam Murphy, Robert Houlihan, Brenda Hurley and Ann Murray.
Megan played the role of Mary-Braud in the Irish première of the opera Banished by Stephen McNeff, which took place in Kilmainham Gaol. She then went on to play the role of Sirena in Francesca Caccini’s opera Alcina, where she was featured in The Irish Times newspaper. She has also played the role of Lucia in scenes from The Rape of Lucretia by Benjamin Britten, which was coached by Brenda Hurley, the Director of the International Opera Studio in Zurich. Megan performed at a lunchtime concert at the National Gallery of Ireland which was presented in conjunction with the exhibition of paintings by Spanish painter Joaquin Sorolla and it was curated by the prestigious Ann Murray. She was also a soloist in the concert performance of A Heavenly Christmas Tree by Colin Mawby, and this was conducted by Blanaid Murphy.
Upcoming engagements: The role of Jane in the world première of the opera Dreamcatchr by Kevin O’Connell. Megan will be making her National Concert Hall debut on March 22nd as the soprano soloist for Mozart's Requiem.