The Right in Latin America. Elite Power, Hegemony and the Struggle for the State 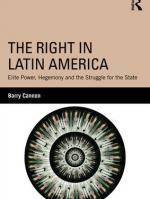 From the emergence of the Left as a force for government in Latin America at the turn of the millennium, most analysis was directed at studying this emerging, powerful force.  I was among those who embarked on studying this phenomenon, working primarily on Venezuela’s charismatic leader, Hugo Chávez. However, I also realised that the Right had not gone away and that it was necessary to keep an eye on what they were doing in the region. I was lucky enough to receive support from the Irish Research Council to work on this issue, and this book is the result of those efforts.

On embarking on the project I quickly realised that a party-focused approach would not work. I had lived in Latin America for quite a few years, and knew from first-hand experience the vertiginous socio-economic inequality, with racial and gender aspects, which characterized the region. Such inequality, with its resultant concentration of elite power, had created a Right in the region which cared little for party politics. After all, why bother trying to convince voters when you had untold economic and ideological power at your fingerprints and the majorities were immersed in poverty? What could they know anyway, with their lack of education and disinterest in voting? And if the worst came to the worst, there was always the Army and friends in the United States and Europe to call on for support.
A new approach then was needed, one which would take into account these other factors which had characterised the behaviour of the Latin American Right in the past – economic, ideological , military, transnational and political power – and I found such a framework in Michael Mann’s work on social power. Using Mann’s framework I show how elite dominance in these key areas has had a profound influence on the political strategies of the Latin American Right in the past. Mostly, however, I try to show how Left governments in the present context, especially the more radical ones, have threatened elite power in these areas, influencing Right-wing strategic responses as a result. These responses can vary from elections, through street protests and media campaigns, to military coups, depending on the level of perceived threat felt by elites from the Left.

In this way, I try to uncover the dialectical nature of the Left/Right relationship in contemporary Latin American politics, while simultaneously providing pointers as to how the Left can respond to the challenge of the Right’s resurgence in the current context of Left retrenchment.

In all, I hope that this multifaceted, interdisciplinary approach, including original research among Right-leaning actors in the region, makes the book an original and more comprehensive contribution to study of the contemporary Latin American Right, at a critical juncture in the region’s history.

Barry Cannon is a Lecturer in Politics at Maynooth University, Ireland. His research is primarily centred on Latin American politics, with particular expertise on Peru, Venezuela and Central America.