Why cinnamon is the Christmas spice that keeps on giving 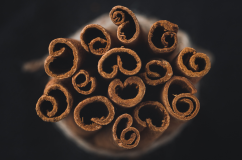 Research shows that cinnamon and its constituents have a wide range of medicinal applications, writes Dr John Stephens and Amanda Doyle, Department of Chemistry

Cinnamon is one of those spices inherently linked with Christmas. Whether as an addition to Christmas cookies, mulled wine, a spiced latte or a cinnamon-scented candle, this distinctive aroma surrounds us at this time of year. But cinnamon is more than a fragrance or food ingredient. Scientific research points towards the potential effects of cinnamon and its constituents across a wide range of medicinal applications, with numerous scientific studies already carried out in this area.

Cinnamon is a common food ingredient that has also found other uses. For example, in biblical times it was utilized as a perfume in rubbing oils and cinnamon was employed as a fragrance in the preservation of dead bodies in ancient Egypt.

Cinnamon spice is obtained from the inner bark of several trees within the Cinnamomum genus and consists of several naturally occurring chemical substances. One such substance is cinnamaldehyde which can be found in large but varying amounts depending on the Cinnamomum species. In some cases, the percentage of cinnamaldehyde in cinnamon extracts can be very high with values reaching up to 90%. This is important, for it's the cinnamaldehyde that has been identified as the cinnamon component that gives rise to much of the reported medicinal properties of the spice.

Many laboratory studies have been done exploring cinnamaldehyde's potential activity in a multitude of disease settings. Such work has shown that they exhibit anti-diabetes, neuroprotective, anti-oxidant, and anti-cancer functions. Other fascinating medicinal properties of cinnamon that have been studied include its antimicrobial and anti-obesity activity.

Cinnamaldehyde possesses antimicrobial properties against a range of bacteria including Escherichia coli, Staphylococcus species, Listeria species and Salmonella species. Some of these bacterial names might seem familiar and this is perhaps because they are recognisable as food-borne bacteria and are associated with food poisoning. In addition, some of these bacteria have multi-drug resistant strains, meaning they have become resistant to many of the medicines doctors currently prescribe to treat infection.

Interestingly, cinnamaldehyde has also been incorporated into edible antimicrobial films which are prepared from fruit and vegetable raw materials. It has been shown to inactivate foodborne pathogens either by direct contact or by vapours released from the films in closed containers.

Recently, cinnamaldehyde has been studied for its anti-obesity effects. Here, researchers investigated the ability of cinnamaldehyde to induce a phenomenon called thermogenesis (which causes the body to produce heat) and related this property to an ability to increase energy expenditure.

In the study, a group of men were administered a single dose of cinnamaldehyde and subsequently noted an increased energy expenditure of approximately 3.6 kcal over the course of the 90-minute experiment. The researchers suggested this increased energy expenditure may explain some of the anti-obesity effects that have been reported for cinnamaldehyde.

The thermogenic properties of cinnamaldehyde/cinnamon are also interesting because this property means that its consumption can improve cold endurance. This is an intriguing possibility as the heat generating mechanism could help delay or prevent hypothermia by reducing or slowing a fall in core body temperature when exposed to cold temperatures.

One of the reasons why cinnamaldehyde is so interesting to researchers is because it is naturally occurring. This is attractive for many reasons, including commercial ones as there has been a significant move towards the use of natural products as additives in food and health supplements. Cinnamaldehyde is Generally Recognized as Safe (GRAS) by both the Food and Drug Administration (FDA) and Flavour and Extract Manufacturer's Association (FEMA) in the United States and may be used in foodstuffs in Europe. On this basis, cinnamaldehyde can be viewed as a safe food and flavour additive, with a pleasant taste and odour, and hence has found widespread use industrially.

However, cinnamon and cinnamaldehyde are not in themselves the answer to a bacterial infection or antimicrobial resistance. They are an intriguing and naturally occurring chemical that, with subsequent chemical modification and research, could lead to new antimicrobial or medicinal strategies.

At Maynooth University, we are interested in how the chemical structure of molecules, including food additives like cinnamaldehyde, dictate their biological function and recently reported how certain structural modifications improved the antibacterial activity of cinnamaldehyde.

Our work discussed the low toxicity of the new cinnamaldehyde derivatives and explored their mechanism of action, which we hope will lead to further insight into medicinal roles for cinnamaldehyde. Enjoy your cinnamon this Christmas and, as to the future, watch this space...or should we say "watch this spice".