There are clear links between personal ethical, moral and philosophical beliefs and the growing global action around sustainability in business. This is among the findings of on-going research by Dr John Cullen, senior lecturer in the Maynooth University School of Business. 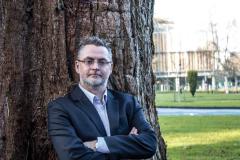 “The language of the corporate world has changed. Increasingly, we hear less about ‘competitiveness’ and ‘productivity’ and more about the sustainability of corporate models,” notes Dr Cullen. “Much of this is a reaction to deep-seated personal beliefs which are increasingly affecting corporate behaviour,” he says.

Consumer activism, powered increasingly by the dynamic speed and reach of social media, has made sustainability an imperative for companies. In this era of open and rapid global communication ‘Greenwashing’ – adopting a mere cosmetic approach to environmental/sustainability issues for marketing reasons - is quickly exposed.

Dr Cullen is exploring businesses developed by those dedicated to working with nature and having a positive impact on the environment.  His research subjects range from the more mainstream – entrepreneurs similar to Anita Roddick of the Body Shop - to the less familiar; people describing themselves as pagans, or witches, driven by a fundamental connection with the natural world.

The notion of economic activity and business practice being related to religious and spiritual systems is a well-established concept, Cullen notes. Weber famously outlined in his 1930’s work ‘The Protestant ethic and the spirit of capitalism’ that capitalism demanded an ethic (or belief system) to control the relationship between people and the material world.

“Discipline and self-denial involved hard work and the rejection of material pleasure as a means of securing salvation in the afterlife. This mind-set or belief system provided the moral foundation for capitalism and is seen as a key contributor to economic success in certain areas of Europe during the late Industrial era,” Cullen observes.

There is a widespread acceptance now that sustainability is no longer a discrete function operating in its own silo or existing merely as a functional role within a corporate affairs department. Rather, organisations are aspiring to adopt a sustainability philosophy that guides every aspect of business operations. That means organisation-wide commitment to sustainability and strong ethical business practices led from the top and permeating throughout the entire fabric of the organisation.

“Moreover, where once sustainability was seen a cost, now instead it is being viewed as a source of enduring value and those organisations that can align themselves best to this agenda are well positioned in respect of some of the fastest growing business opportunities of the 21st century,” Cullen observes.

Cullen’s research identifies a number of discrete groups of entrepreneurs and business managers that are addressing sustainability in different ways.

While some businesses, he notes, have had to revisit their operations with a cold eye to effectively retrofit sustainability, others have founded businesses based on such principles. Anita Roddick’s Body Shop, Ray Anderson’s Interface and David and Stephen Flynn’s The Happy Pear are all examples of successful businesses driven by a work ethic that places sustainability at their heart.

Weber studied how religious beliefs influenced orientations to work, and Cullen feels that much of the spiritual aspects of his work is often downplayed in contemporary research on new spirits of capitalism.  In recent times, more broadly based spiritual, ethical and moral beliefs, often galvanised around the notion of sustainability and mutual and multiple stakeholder benefits, have come increasingly to the fore.   As well as studying how managers and business owners incorporate sustainability into their work ethic, Cullen also engages with people who identify as eco-spiritual or having a nature-based faith.

He has conducted projects which investigate how pagans, wiccans and a variety of religious groups who have a deep reverence for nature engage with the contemporary workplace.  These groups and individuals are sometimes mocked or feared due to their positions outside the mainstream orthodoxy, yet he finds that they have strong levels of social and environmental consciousness alongside a scientific and practical mindset.  They are critically minded, work in tune with nature, are strongly socially engaged and put nature at the heart of their belief systems often while successfully participating in mainstream economic life.

Many are thriving entrepreneurs who have built successful businesses or work practices, yet are often cautious about revealing their spiritual beliefs in order to avoid misrepresentation and misunderstanding.

“The notion of a work ethic substantially influenced by a spiritual or moral belief system has evolved. There is evidence that a wider set of beliefs – encompassing a much broader spectrum of spiritual belief systems, lifestyles and philosophies than one bounded by a narrowly defined religious faith, exists. There are many successful businesses throughout Ireland which are based on these ideologies” he explains.

Clearly interest in sustainability is growing. Cullen says that there has been a spike of research interest in this topic lately and he cites recent research which claims that the top 50 global MBA programmes in the Financial Times ranking reported that a majority of business schools required at least one ethics or corporal social responsibility class to be covered as part of their curriculum and that there was a noticeable trend towards the inclusion of sustainability courses. This marked a significant change from the situation less than two decades previously. History has demonstrated that shocks to the capitalist system - such as those experienced in 1929 and more recently in 2008 - result in a redefinition of traditional capitalist values. Hence, the increased focus on sustainability since the latest financial crisis.

But there is another pending crisis which may change things even further. “The question of how the looming climate crisis will change the spiritual relationship that people and groups have with their work is perhaps one of the most important issues that we face in management and organisational studies and it is interesting to see how current thinking mirrors and then develops some of the ideas of the past,” Cullen concludes.