Around 10 years ago, students started to take control of their own learning. The explosion in internet use, pushed on by sites such as YouTube, rapidly changed how students, scholars and those with an interest in literature approach canonical texts, especially those of the great playwright William Shakespeare. Desdemona and Hamlet became open to parody. Ophelia's status as an icon of female culture took new directions. Academics noticed that Shakespeare's plays were being altered, both subtly and radically, by YouTube actors. 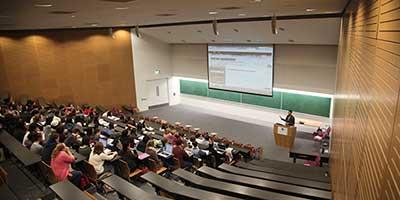 The internet is continuing to change Shakespeare's works – works which were traditionally considered inviolable and static – apace. Dr Stephen O'Neill, a lecturer in English at Maynooth University with a special interest in Shakespeare studies, is exploring how new media is reshaping our understanding of the English language's most iconic writer.

The project emerged out of O'Neill's interest in the afterlife of texts, or how they enter into popular culture. “There's a big interest in Shakespeare studies,” says O'Neill. “He's different from other playwrights of his era. His works are not only studied in schools, but used as a global reference point. Novelists and film-makers have continued to respond to, or rewrite, his plays. There are also adaptations that go back to an earlier period. YouTube is a natural progression of this, and it is changing our view of the plays as static entities into something that can evolve and change.”

Whereas, in 1971, playwright Edward Bond rewrote King Lear as the political and social critique Lear and, in 1973, depicted Shakespeare as an ageing and morally bankrupt retiree in Bingo: Scenes of Money and Death, young YouTube users are also putting their spin on the work and life of the bard.

It is, says Dr O'Neill, a surprisingly democratic exercise. “A lot of students looked at the film director Baz Luhrmann's interpretation of Romeo and Juliet while in school, and now as university students they are looking at Shakespeare again. Popular culture is often and increasingly an entry point for Shakespeare. In creating YouTube videos around Shakespeare's work, they sometimes use the original text, sometimes an edited version, and sometimes abandon the original altogether in favour of a modern idiom. Many of the YouTube videos parody the language, having contemporary versions of the characters speak in this old language in a modern setting.”

The Shakespearian tragedies, which tend to receive more attention in the English canon, give students a wide range of characters and emotional responses to play with, says Dr O'Neill.
The heroine Ophelia, a major character in Hamlet, has long been an icon for teenage girls. YouTube has given new life to these interpretations, a theme which Dr O'Neill explores. “There are entire sites devoted to Ophelia who, in the play, takes her own life off stage. YouTube, Flickr, Tumblr and other social media sites have allowed fan responses to Ophelia, speaking to young women and with a sense that their own identities are not always within their control.”

The archetypes of Shakespearian plays – from the doomed lovers of Romeo and Juliet to the villainous Lady Macbeth – leave scope for exploration online. Sensitive issues such as race are replayed and relived in online interpretations of the play Othello. On the other hand, fan culture is sometimes less about the deeper symbolism of the play and more about how well the hugely popular British actor Benedict Cumberbatch performs the role of Hamlet.

They often take creative and playful turns. In one “mash-up” video (a video which combines clips from different pre-existing videos into something new), YouTube content creators took scenes from Luhrmann's Romeo and Juliet and spliced them with original material; in another paying homage to actor David Tennant's performance of Hamlet, they took BBC footage of his role and added their own soundtrack. Actors are posting their own monologues on YouTube as part of their showreel. All these videos, some of which date back as far as 2006, are becoming objects of analysis in their own right at academic conferences.

“It is likely that people will soon migrate to other platforms,” says O'Neill. “Some social media users are, for instance, using other platforms to create elaborate stories for Juliet, making their own story boards and background narratives for her."

The choices of video bloggers (vloggers) and YouTubers reflects the often difficult decisions facing anyone who seeks to bring a Shakespearian text to life, says O'Neill. “Contemporary filmmakers also have to deal with the issue of the language in the texts. Some retain it, most will edit to at least some degree. Critics are concerned about deviations from the text on YouTube but, even in a theatrical performance, the text has to be edited and adjustments made. Some purists reject the idea of any altered text; they feel that the text is the ultimate authority and that the performance should be rooted in that. They question, when you start to move away from the text, whether it is Shakespearian anymore.”

O'Neill suggests that these critics are ignoring the arc of Shakespeare studies to date. “It has always been good at welcoming new forms, including film and new media. This ability to adapt to new mediums has given a vitality to Shakespeare. This warrants analysis, even if it is a niche. It has usefulness for students of Shakespeare, undergraduates, and anyone who is interested in his works. YouTube is also, to some extent, creating an unbounded archive – albeit one where a video can be removed or altered at short notice for copyright issues.”

Shakespeare on YouTube is a form of interpretation in itself, influenced by broad and general trends in criticism, says O'Neill. “They are changing how people teach the plays, especially if the teacher is younger, and how students engage with them. It is informing a student's sense of what Shakespeare constitutes. Students are creating their own performances, sharing them, having them recognised. It is possible that we are moving into a post-textual time, when you'll have a generation where the dominant register will be the visual rather than the language. It is all evolving, all changing.”