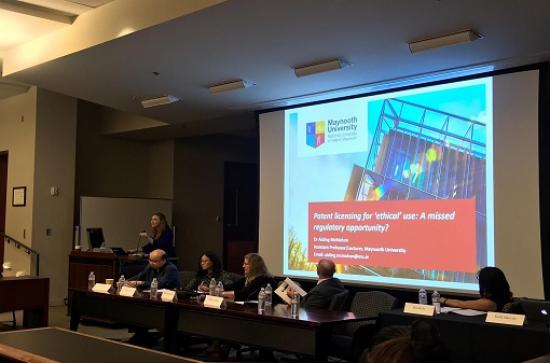 As part of her Irish Research Council funded project on patents and ethical licensing, Dr Aisling McMahon presented a paper at the plenary panel ‘Patents: Big Ideas for Reform’ of the International Association for the Advancement of Teaching and Research in Intellectual Property (ATRIP) conference in Vanderbilt University, Nashville on 26th August. Dr McMahon’s paper “Patent licensing for ‘ethical’ use: A missed regulatory opportunity?” considered the use of ethical conditions on patent licensing within a broader regulatory framework for advanced biotechnologies. The ATRIP conference is one of the largest international intellectual property conferences held annually and this year hosted speakers from 32 countries.

Dr McMahon writes primarily on medical law and the relationship between health and patent law. Her recent work in the patent field includes a 2017 article examining the role of the morality provisions in the planned European unitary patent system. Dr McMahon’s forthcoming paper in the European Intellectual Property Review (2019) (pre-print version available here) examines the marginalisation of ethical issues within gene patenting based on research conducted for a British Academy funded project on the topic.

Dr McMahon is a lecturer in Maynooth University Department of Law where her teaching includes a module on Contemporary Issues in Medicine and the Law and a new module on Patents, Health and Biotechnologies.