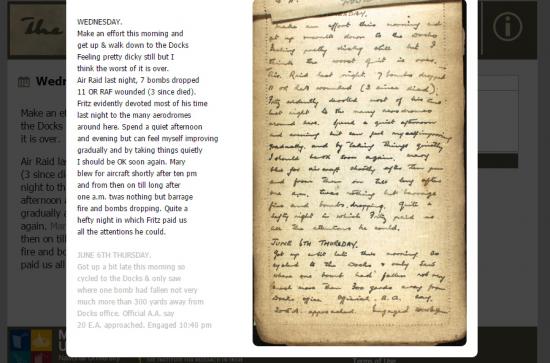 An extract from Albert Woodman's diary.

A digitised and fully transcribed version of an Irish World War One soldier’s diary, offering an intimate first-hand account of life on the Western Front in 1918, was launched today by author and historian Turtle Bunbury at Maynooth University.

The diary, written by Albert Woodman, a signaller in the Royal Engineers, provides fascinating details of day-to-day life in Dunkirk, France, from mid-January 1918 and continuing through to armistice.

The diary is available for viewing here.

Woodman was the eldest son of an Anglo-Irish family living in Glasnevin, Dublin, prior to the outbreak of the First World War. With skills in telegraphy developed while working at Dublin’s General Post Office, Woodman joined the Royal Engineers’ Signal Corp and was soon stationed in France. While home on leave in late 1917, he married his sweetheart, Nellie Mae Preston, before returning to France.

From January 1918 to November 1918, Woodman wrote in the diary, intended for Nellie should anything happen to him. Woodman’s meticulous entries mention the near-constant air raids from German forces, comment on his work in the Signal Office behind the front lines and the occasional monotony of a soldier’s life, and include numerous maps and newspaper clippings which reference various campaigns and advancements.

The interactive website of the Woodman Diary is freely available to the general public and features high-quality digital images of the diary, transcribed entries with annotations and notes, video interviews, and background information on the Woodman family. The project was developed by students enrolled in An Foras Feasa’s  MA in Digital Humanities under the supervision of Professor Susan Schreibman and is hosted by Maynooth University. The digital scholarly edition of the Woodman Diary is part of the growing field of digital humanities, which strives to emphasise the value of digital-led research and practice.

Woodman’s granddaughter, Joyce Timms, generously donated the original diary to Maynooth University Library following the completion of the imaging project. This important artefact is now housed in a state-of-the-art, environmentally controlled storage area in Special Collections & Archives at the Maynooth University Library, where it will be preserved for future generations. The diary will be made available to researchers and the general public for consultation in the new Reading Room of the recently extended Library.