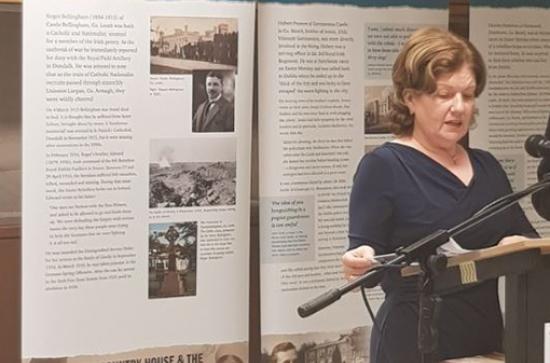 An exhibition exploring the impact of the First World War on the Irish Country House, curated by Prof Terence Dooley was launched on Thursday 4 October in Maynooth University Library.

The CSHIHE, History Department, OMARC, and Maynooth University Library launched an exhibition  on The Country House and the Great War on Thursday 4 October 2018 in Maynooth University Library. The launch was carried out by Prof Marian Lyons, and was preceded by a talk by Dr Ian d’Alton, ‘“The Unreasoning Adventure”: How the Great War Took the Irish Gentry Prisoner’. The Exhibition was curated by Prof Terence Dooley (History Department) and Nicola Kelly (OMARC). It focused on the role of the Irish country House in the Great War.
The 5th edition of Burkes Landed Gentry listed over 500 families for Ireland, 82 per cent of whom were represented at the Front by at least one member of the family. Around 25 per cent of those who fought did not return home and, of course, many others were physically or mentally scarred for life. The Great War had dramatic political, economic, and social consequences for Irish Big House families.
The exhibition coincided with the commemoration of the Armistice of 1918 and highlighted in particular the phenomenon of the ‘unreturned army’ and the social and psychological impact of death on individual families.
The exhibition attract widespread public and media attention, and was the subject of an extensive piece in the Irish Times. It is presently on display in Airfield House in Dublin.
It was part funded by the MU Commemoration Committee.