Letters of 1916: A year in the life’ project launches 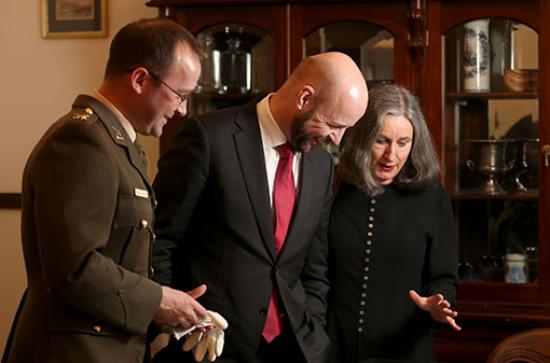 What were people in Ireland writing letters about 100 years ago? What were they thinking?  How were they affected by the Great War? The Easter Rising? How was the government of the day responding to domestic and international pressures? Researchers at Maynooth University are today launching an online archive of letters written 100 years ago that will enable the public to delve into these important questions.

The Letters of 1916 project has crowd-sourced letters and their transcriptions from memory institutions and members of the public in Ireland’s first public humanities project. Letters written between 1 November, 1915 and 31 October, 1916 were digitised to create this unique collection, which will be of great interest not only to historians and genealogists, but to anyone who wants to find out what people were writing in Ireland at the time, as well as how people outside of Ireland viewed events here. Moreover, since each letter is available online, the project transports present day readers to a different time, providing a rare opportunity to be, however fleetingly, part of the world they inhabited. Letters of 1916 is making visible a new perspective on events which took place a century ago. The collection contributes to public understanding of what it was like to live an ordinary life through extraordinary times.

As the project leader, Professor Susan Schreibman explains: “Letters of 1916 has created a crowd-sourced digital collection of letters written between 1 November, 1915 and 31 October, 1916. To date it has collected more than 2,500 letters from more than 20 institutions and 45 private collections. These letters cover a variety of topics ranging from the Easter Rising to art, culture, family life and the Great War. Through these letters the project is bringing to life the written words, the last words, the unspoken words and the forgotten words. It is an online collection for the public, created by the public, which is adding a new perspective to life in this period, a confidential glimpse into early 20th century Ireland and the politics of the time.”

This public humanities project makes it possible for anyone to be part of the research process. The Letters of 1916 invites the public not only to help transcribe these precious letters – perhaps the last remnants of the lives of those who have themselves passed into history – but also to ensure that private family history is included in the national narrative by contributing letters to the collection that until now were hidden away in boxes, attics and biscuit tins.

Maynooth University President Philip Nolan welcomed the project: “This is an excellent demonstration of how researchers can utilise new technologies to provide a resource that has tremendous appeal to the general public.  This launch is the culmination of much hard work on behalf of Professor Schreibman and her team, who have ensured that these ordinary voices have not been lost.  Maynooth University’s 1916 commemoration programme is dedicated to ensuring that these voices, and in particular the voices of women, which are often marginalised by history, are preserved.”