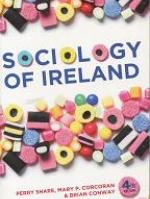 Perry Share and Mary P. Corcoran were students together at Trinity College Dublin in the early 1980s.  Mary went to New York City to do her PhD while Perry went to Central Australia.  On his return to Ireland, Perry took up a post at the Institute of Technology, Sligo where he  still works directing the School of Humanities and Social Sciences. Perry wrote the first edition of A Sociology of Ireland with Dr. Hilary Tovey, who had taught both Mary and Perry in TCD.  Mary came on board for the third edition, which involved a substantial review of the earlier editions.

The fourth edition, saw Brian Conway (also of Maynooth University) join the writing team.  This edition required a full overhaul of the book to take account of the seismic changes that had occurred in Irish society after the economic collapse in 2008.  The number of chapters was reduced and new chapters were introduced on 'Who Rules Ireland?' , 'Irish Identities' and 'Sociological Futures'.

The book is intended as a comprehensive overview to the Sociology of Ireland,  and is complemented by the Irish Sociological Chronicles series, seven volumes of which appeared between 1998 and 2010.