Global Games: Production, Circulation and Policy in the Networked Era 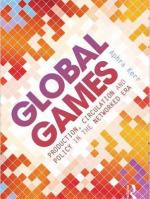 This book draws upon a number of funded and unfunded research projects which I have conducted over the past ten years. It charts the shift in this media industry from an industry that produces products on disks to be sold through shops, to one that produces online services and whose business models are underpinned by user generated data. It sought to understand how games like Angry Birds and Pokemon Go make money, and how they attempt to produce online communities. It is also concerned with the social dynamics of large transnational online communities, and the policy challenges they raise for companies, governments and regulators.

The back of the book states "In the last decade our mobile phones have been infiltrated by angry birds, our computers by leagues of legends and our social networks by pleas for help down on the farm. As digital games have become networked, mobile and casual they have become a pervasive cultural form. Based on original empirical work, including interviews with workers, virtual ethnographies in online games and analysis of industry related documents, Global Games provides a political, economic and sociological analysis of the growth and restructuring of the digital games industry over the past decade. Situating the games industry as both cultural and creative and examining the relative growth of console, PC, online and mobile, Aphra Kerr analyses the core production logics in the industry, and the expansion of circulation processes as game services have developed. In an industry dominated by North American and Japanese companies, Kerr explores the recent success of companies from China and Europe, and the emergent spatial politics as countries, cities, companies and communities compete to reshape digital games in the networked age."

Aphra is director of the Department's MA in Sociology (Internet and Society).