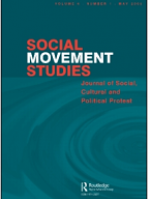 In the past, I have studied the way that social justice advocates have used the European Union (EU)  as a place to advocate for the reduction of poverty in European societies and the rights of disadvantaged groups including women. Here I look at the challenges that face gender equality activists at a time when the economic crisis and austerity has pushed women’s economic, social and political rights off the agenda of many European governments.

My motivation to research and write about these issues comes from my experience as sociologist studying the subtle but important influence that civil society organisations working together can have in policy making spaces like the EU and as a feminist my intellectual and ideological commitment to highlight the durable and pervasive nature of gender inequality.

I think that this article is interesting for readers as it outlines the kinds of activism and the issues that feminists working beyond the state engage in and the problems that they confront when they decide to work close to institutions and accept funding for their advocacy.

Overall, I argue that feminist activists are constrained by both their engagement with formal political institutions and the assumption held by many national and European policy makers that gender equality is either an issue that has been largely resolved, or one that is too expensive to deal with at a time of economic crisis. However, I also suggest that despite these constraints, feminist activists are working both to keep their organisations and the issue of gender equality alive. Overall, this research helps us think about where might be the best place to advocate for social rights, the tradeoffs for activists that work close to large international institutions and the reasons to keep the issue of gender inequality on the political agenda.

Pauline Cullen (2014): Feminist NGOs and the European Union: Contracting Opportunities and Strategic Response, Social Movement Studies: Journal of Social, Cultural and Political Protest, DOI: 10.1080/14742837.2014.965674 [This article may be behind a paywall but contact the author if you would like to know more.]