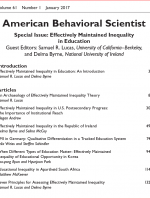 This special issue published in American Behavioural Scientist in January 2017, was edited by Samuel R. Lucas at the University of California-Berkeley and Delma Byrne at Maynooth University Departments of Sociology and Education.

It presents the results of an international research study on the ‘Thresholds of Inequality’ across 15 nations, funded by EQUALSOC, a European-Union research project. In this special issue, five disparate-context studies of educational inequality are linked to theoretical and methodological reflections to move us closer to cross-national answers. The countries under investigation include the US, Ireland, Germany, Korea and South Africa. Taken together, these analyses deepen our understanding of the intergenerational transmission of inequality while providing theoretical reflection and methodological guidance for future efforts to assess the applicability of the theory of Effectively Maintained Inequality (EMI). The articles collectively offer new resources for consideration, thereby advancing the multidisciplinary, policy relevant, public dialogue on inequality.

The paper on Ireland by Byrne and McCoy, captures young people’s transitions during three distinct and remarkable macro-economic fluctuations. Over the cohorts under investigation, Ireland had changed from a recessionary economic climate and prolonged economic stagnation for much of the 1980s to a booming economy by the middle of the mid-2000s and one of the most dynamic economies in the world during the “Celtic Tiger” period. The patterns of social-class inequality over a 30-year paper found in this article suggest that qualitative differences at the same level of education (tracking decisions taken in the transition from lower secondary to upper secondary, subject-level differentiation in the upper secondary mathematics curriculum, and access to different sectors of higher education) represent a persistent barrier to greater equality in the Irish context.