The Eastern Enlargement of the European Union 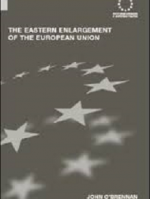 The history of European integration has been one of successive and successful enlargement rounds. This book examines the EU’s historic 2004 eastern enlargement and asks why the EU decided to expand its membership so significantly and what factors drove the process forward. I argue that the ‘geopolitical earthquake’ of 1989 and the long accession process that has followed have led to a fundamental ‘reimagining’ of what the European Union represents.

The book examines this process from three perspectives: empirical, institutional and theoretical. The empirical dimension charts the evolution of the enlargement process from the Fall of the Berlin Wall in 1989 to the completion of negotiations in 2002. The second part evaluates the key institutional roles of EU actors – the Council, Commission and European Parliament. The final part engages with the theoretical explanations for enlargement, arguing for a constructivist approach that shows how social structures endow material structures with substantive meaning. The book argues that constructivism offers a deeper and fuller understanding of the historical and cultural templates that facilitated the ‘return to Europe’ of the Eastern countries.

The constructivist reading of the EU’s enlargement process to CEE stresses the importance of shared understandings of what the European project represents. The constitutive values of the European political order, reflecting a common collective identity and manifested in the Copenhagen criteria, represent the key building blocks for this enlargement round. The book was the first to examine the inter-institutional management of the enlargement process and adopted a highly original approach to examining the different roles of the Commission, Council and Parliament. The genesis of the book lies on the dramatic events of 1989 when the Berlin Wall fell and the Cold War came to an end, facilitating a kind of 're-unification' of Europe.