Church, state and social science in Ireland. Knowledge institutions and the rebalancing of power, 1937–73 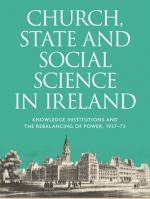 This book examines how the balance of power between the Irish state and the Catholic Church has shifted since the middle of the twentieth century. This shift is explored through a case study of Irish knowledge institutions that engage in social science teaching and research. Inhabiting a sphere the church once monopolised, such institutions became increasingly aligned with state projects from the end of 1950s. When the church later sought to rely on sociological arguments to resists liberalising changes in law and policy, opposing views could also claim the legitimacy of expertise and the issue of public trust became crucial

The book revisits John Whyte’s seminal work in this area but, drawing on the mass of important new material that has become available to scholars through the subsequent opening of both church and state archives, it highlights the importance of educational issues where Whyte emphasised health ones. The fact that some key clerical sociology academics of the period covered went on to become bishops whose handling of clerical sex abuse allegations has been severely criticised in recent investigations provides an opportunity for the Conclusion to develop a perspective on church–state relations that is strongly informed by the Irish church scandals ongoing since the early 1990s in a way that other work on the topic is not. Important new light is shed on key figures of mid to late twentieth century Irish history including Sean Lemass, T.K. Whitaker and Archbishop McQuaid of Dublin while the eccentric but perennially fascinating figure of Fr. Denis Fahey and his Maria Duce followers also figure strongly.​

How we came to write the book

In researching the impact of the Technical Assistance provided to Ireland by the USA under the Marshall Plan we became aware of two social paradigms competing for influence in Ireland in the decades after world War Two. These were the Social Teaching of the Catholic Church as expounded in a succession of Papal Encyclicals and the “gospel of productivity” preached in post-war Europe by the US government and by a variety of agencies that it funded, a gospel whose tenets were over time embraced by Irish civil servants and politicians. As the standard work by John Whyte on Irish church-state relations was three if not four decades old, we decided to revisit the subject by making use of the mass of material that had become available since the publication of Whyte’s book thanks to the opening of church and state archives.

Peter is a Lecturer in the Department of Sociology. Peter's webpage.

Maria Feeney has lectured in Sociology and Education at Maynooth University, Ireland​