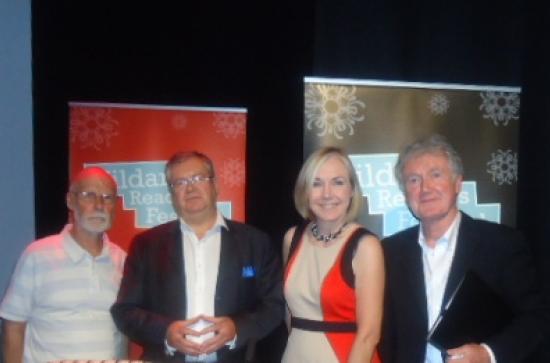 As part of the Kildare Readers Festival 2013 Professor Mary P. Corcoran chaired a conversation on Strumpet City, the Dublin UNESCO "One City One Book" for 2013 at the Riverbank Theatre, Newbridge on Saturday, October 12th, 2013.  The panel included former journalist Padraig Yeates author of Lockout: Dublin 1913; broadcaster Joe Duffy whose grandmother grew up in the tenements on Church Street, Dublin; and actors Angela Harding and Bryan Murray who played 'Mary' and 'Fitz' respectively in the acclaimed 1980 RTE production of Plunkett's book.  The event- which included readings from the book- ranged widely over the historical and sociological resonances of both Strumpet City and the seminal events in Dublin in 1913.