Professor Kevin Anderson on Marx’s Late Writings: Theories of revolutionary change and of alternatives to capitalism 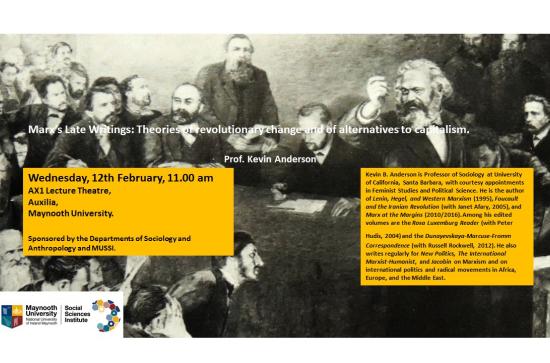 In his last years, Marx sketches three types of revolutionary change, each of them different from the thunderclap of a unified working class uprising that forms the conclusion of the first volume of Capital. Important as that rigorously dialectical abstract model is, it does not deal with race, colonialism, gender, the state, or other concrete factors discussed in his later writings. (1) In 1869-70, Marx writes that a British workers uprising might be sparked by one in Ireland led by the peasant-based Fenian nationalist movement, with French involvement as well. Inside Britain, English prejudice and condescension toward the Irish infected the working classes and undercut the formation of class consciousness.  (These Marx writings build upon those of the 1860s on race, class, and revolution during the US Civil War.) However, Irish independence could shake up what he saw as the racialized consciousness of English workers, helping the largest and most organized contemporary working class to see better what he regarded as its true interests.  (2) Similarly, in his 1877-82 writings on Russia, Marx suggests that resistance in its communal villages against capitalist encroachments could lead to a form of modern communism, if this resistance could link up with the Western European labor movement.  On Algeria, India, and Latin America, his notes on communal village structures and anti-colonial resistance imply something similar, also taking up gender in a serious way.  (3) During the 1870s, Marx clarifies and deepens his concept of communism in the German and French editions of Capital (1867-75), in the Civil War in France (1871), and in the Critique of the Gotha Program (1875), where he sketches non-statist forms of free and associated labor that go far beyond the more centralist and statist notions put forward in the Communist Manifesto.

Kevin B. Anderson is Professor of Sociology at University of California, Santa Barbara, with courtesy appointments in Feminist Studies and Political Science. He is the author of Lenin, Hegel, and Western Marxism (1995), Foucault and the Iranian Revolution (with Janet Afary, 2005), and Marx at the Margins (2010/2016). Among his edited volumes are the Rosa Luxemburg Reader (with Peter Hudis, 2004) and the Dunayevskaya-Marcuse-Fromm Correspondence (with Russell Rockwell, 2012).  He also writes regularly for New Politics, The International Marxist-Humanist, and Jacobin on Marxism and on international politics and radical movements in Africa, Europe, and the Middle East.

Sponsored by the Depts of Sociology and Anthropology, and Maynooth University Social Sciences Institute. 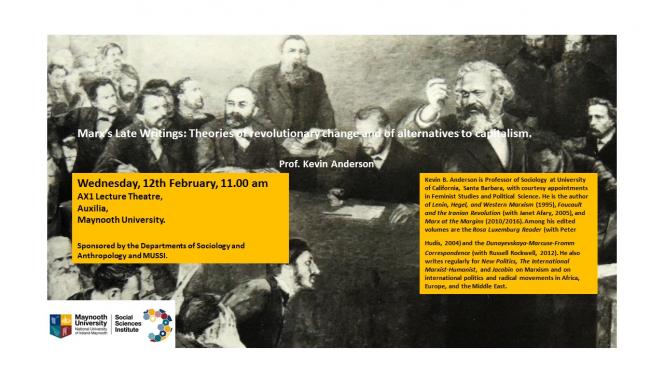