Why winter bees are more vulnerable than summer bees 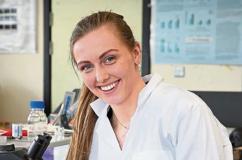 While winter honeybees live longer than their summer cousins, they face more threats from pests and diseases writes Rachel Ward, a researcher in the Department of Biology

Bees are in decline. In Ireland, 33% of winter hives are lost every year. These losses come at a time where human dependence on insect pollination is increasing, thereby putting greater pressure on current hives to pollinate a vast range of crops. Of the 115 leading crops that we use for food, over 75% of them are insect pollinated. In global food production terms, it means that insect services equate to €263 billion in crop production.

Honeybees are key players in insect pollination, which can be attributed to their co-evolution with plants. Flowering plants first appeared 130 million years ago and bees got a taste for pollen 30 million years later by consuming pollen covered insects. The honeybees that we know today first originated approximately 35 million years ago, though it is suggested that there are older fossils hidden within the rocks of Southeast Asia. Modern beehives first began to appear in the 19th century.

What is it about honeybees that make them excellent pollinators? Pollen sticks to small hairs that are found all over honeybees, which is transported and delivered to surrounding flowers. This is pollination: the transfer of pollen from one flower to another. It is necessary for plants to reproduce and necessary for the production of fruits and crops such as apples and almonds.

Honeybees gather the pollen from flowers they have visited into pollen baskets which are found on the hind legs of the bees. This allows them to visit large numbers of flowers before returning to the hive to dust themselves off and deposit their pollen stores. Pollen baskets ensure that pollen is distributed within the flowers as the bees will bury themselves deep within flowers to get the reward they are truly looking for: nectar.

Nectar is a high energy substance that plants produce during photosynthesis. It is the plant's way of rewarding honeybees for visiting them and it is thanks to nectar that we can gather honey from our hives. Nectar is the main component of honey, so without plants rewarding honeybees with nectar for their services as pollinators we would be in a world without honey.

Honeybees live all year round and do not hibernate as some may believe. Instead, they gather themselves up in a cluster within the hive and buzz together to stay warm. Worker honeybees will cluster tightly together around their queen to keep themselves warm through the winter, until temperatures rise again in the spring.

The queen does not lay during the winter months, so the hive numbers are much smaller in winter than they are in summer. Laying and rearing newly emerging bees would require large amounts of food which is limited during the winter. Because of this, wintering honeybees have evolved to survive up to six months, enabling them to continue the colony through the winter months and aid in rearing summer bees when spring emerges.
Summer bees can live for approximately six weeks and survive both inside and outside of the hive. Summer bees are responsible for building up food stores in the hive, which will be consumed by the wintering bees during the winter months.

Unfortunately, winter bees are more vulnerable than summer bees, which is becoming a predominant issue with regard to hive losses. Hives need to be stable and in good health before the winter settles in. However, hives can be a hub for pests, such as the Varroa mite, and diseases like deformed wing virus (DWV). These threats to the health of the hive can be so severe that the hive will fail during the winter. Treatments are available to beekeepers for pests such as Varroa, though these treatments may have adverse effects on the bees, potentially weakening their ability to fight off diseases.

Ireland has a single native honeybee species called Apis mellifera mellifera. My research focuses on this species and is looking to investigate what makes a winter bee live so long. We aim to improve their survival rates and to gain a better understanding into their biology and immune responses to pathogens and treatments. We want to determine if the prolonged lifespan of the winter bee is due to a weakened immune response to pathogens, or perhaps it can be attributed to the reduction in the physical activity of the bees.