Vaccines: Speaking out to stop little lives being wrecked

Vaccines: Those of us from an earlier era must speak out to stop little lives being wrecked 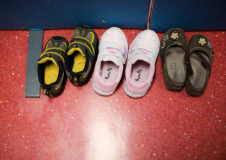 Growing up in the Ireland of the 1960s, damage from infectious disease was part of the landscape of our classrooms. The child with damaged heart valves from rheumatic fever, the one wearing calipers to help them walk after suffering polio, the children who suffered hearing or sight loss because their mothers had rubella during pregnancy.

TB and measles
We were tested for tuberculosis, our parents waiting with dread to see the result. It was not so long since tuberculosis had killed thousands of Irish children and adults each year, although by the 1960s, it seemed modern medicine had finally won the battle against this annihilator of families.

Almost all of us bore the expected facial scars from chickenpox, the less frightening face of infectious disease. Parents would implore us “Don’t scratch!” But of course we did.

And measles. Measles filled every parent of that era with dread, as they knew of the life-changing complications some children suffered from it. When I and my three siblings went down with it, our mother swiftly blinded up the windows, as light was understood to damage the eyesight, and she warned us of the dangers if we pulled them down.

Measles scared parents because they knew their child might be part of the statistical cohort that would develop serious complications.  Life-changing ones. Hearing and eyesight impairment were fairly common.

We lived in a new era for child health
Measles can lead to meningitis or encephalitis, which might result in lasting brain damage. In rare cases the disease can also cause heart and nervous system disorders.

For the parents of the 1960s and before, getting your child safely through an attack of measles was therefore a landmark, one less worry for their future health.

In a way, our generation was the lucky one: we lived in a new era for child health, when infectious diseases did not kill as easily as they once had. Because we had antibiotics, introduced in Ireland in the late 1940s, and for a long time, miracle workers.

Before that, most families suffered child death from measles or other infectious disease, such as whooping cough, scarlet fever, diphtheria, and of course tuberculosis.

In the Ireland of the 1910s, 20% of the annual 70,000 average deaths were children under the age of five, many dying from these infectious diseases.

Damage was so visible
Antibiotics meant many more survived. But the damage was so visible, the memories of cousins who died or were impaired so strong, that as we became parents ourselves, we embraced the new vaccination programmes available to our own children.

The increasing schedule of vaccination reduced the once hundreds of deaths from measles each year to often nil; diphtheria and whooping cough likewise. And now, we can even prevent types of meningitis. We have come a long way.

We live in an unprecedented era of child health, an era when the battle against infectious disease in our part of the world should be essentially won. Instead, we find that new parents are resisting vaccination, worried about the effects that putting them into their children’s bodies will cause them damage.

In the past few months, we have seen an extraordinary outbreak of measles in Irish children – a disease which the WHO had hoped to eradicate. MMR (measles, mumps and rubella) vaccination rates need to be at 95%t or higher, to provide herd immunity.

The HSE’s Health Protection Surveillance Centre has set up a measles outbreak control team to increase vaccination rates to deal with a very real crisis.

Little knowledge
It seems that new parents have so little knowledge of the power of diseases like measles to kill and maim, that they think the vaccine is more dangerous than the disease. Those of us from an earlier era, those who know the historic statistics, or who have seen the damage to our family members who must live with brain damage or deafness, can tell them otherwise.

We have to, to prevent more little lives being wrecked, more parents being scared as their children suffer from diseases modern medicine has the ability to prevent.

Dr Ida Milne is a disease historian and an Irish Research Council Marie Curie Elevate Fellow at Maynooth University and Queen’s University Belfast. Her book on the 1918-19 influenza pandemic, Stacking the Coffins, Influenza, War and Revolution in Ireland, 1918-19 will be published in June 2018 by Manchester University Press.

This article first appeared on  journal.ie.