Was a white super-state in Southern Africa possible? Was Ian Smith’s disgraced pariah state of Rhodesia always doomed to failure? Could we be living in a world where Nelson Mandela had never been released? What if apartheid had continued in South Africa? 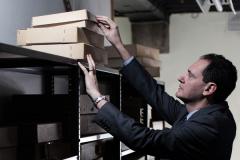 New research by Filipe Ribeiro de Meneses, Professor of History at Maynooth University, offers a glimpse into a top-secret military agreement that could have changed the course of world history.

Together with Dr Robert McNamara from the University of Ulster, De Meneses, who specialises in Portuguese history, has uncovered evidence of ALCORA, a covert alliance between Portugal, South Africa, and Rhodesia (now Zimbabwe), which was aimed at propping up the apartheid regimes and institutional racism of both African states.

ALCORA began in 1970 and lasted until 1974, when Portugal’s dictatorship was overthrown and the country began a slow journey towards democracy. The alliance was so secret that only senior military officers, defence ministers, and Prime Ministers knew of its existence. To this day, it remains unknown as to why the name “ALCORA” was chosen, or what it means.

At the time, Portugal was the last remaining colonial power in Europe. It hovered in a luminal state, wavering between an all-out commitment to its remaining colonies in Africa (including Mozambique and Angola), or repudiating colonialism and throwing its lot with the European Economic Community. As a colonising power, it defied the will of the fledgling European Community. The Netherlands, Ireland and the countries of Scandinavia were among the most vocal critics of Portugal.

While de Meneses became aware of ALCORA during his research for the biography of Salazar, the Portuguese dictator, it was not until 2010 that he collaborated with Robert McNamara to look for evidence of this secretive organisation. This was 30 years after the end of white-ruled ruled and the birth of Zimbabwe; it also marked the declassification of confidential military files. His work is part of a wider research project, “Defying the winds of change: Portugal, Rhodesia and South Africa 1961 – 1980”, funded by the Irish Research Council.

From late 1973, ALCORA was headquartered in Pretoria, South Africa. All along, it was a means for the three countries to suppress the growing independence movements in Southern Africa – movements advocating the “dangerous” idea of “one person, one vote” and racial equality. This was an evolving military alliance with significant political and economic consequences.

Until now, nobody knew the extent of the collaboration between the three countries. The work of de Meneses and McNamara lifts the lid, showing that ALCORA was much more than a loose alliance. There were tiers of councils and committees dealing with practical military issues such as intelligence gathering, communications, photographic reconnaissance and mapping. There were efforts to create a common manual which every officer could carry in his pocket to deal with counterinsurgency warfare. ALCORA produced studies on the military capabilities of surrounding countries, including their airpower and their airfields.

In addition to these military contacts, the Polícia Internacional e de Defesa do Estado (PIDE), the secret police that backed the Portugese dictatorship, first began meeting with the South African and Rhodesian regimes in the 1950s. “These meetings intensified to the point that there was a bi-annual conference between the three intelligence agencies, held in a different location every year,” de Meneses explains. “They came to be seen as social occasions: they often had a programme and might involve trips to restaurants and bars.”

At the meetings, they discussed the common threat: the idea that everybody should have a vote. By working with Portugal, South Africa hoped to suppress Angola, Mozambique’s and Rhodesia’s independence movements, keeping African nationalism at bay. “There were claims of an ‘unholy alliance’ between the countries made as far back as the early 1960s, but even the loudest detractors never knew they were working at this level and at this scale, with such ambitious plans,” says de Meneses. “It is interesting that, even in recent memoirs and interviews given by people who were involved in ALCORA, none of them ever mentioned it. It has been kept remarkably quiet.

“Portugal was particularly keen to ensure the truth did not come out. Even the Truth and Reconciliation Commission of South Africa did not seem aware of ALCORA. France, Spain, Britain, and the United States, for all their intelligence resources, don’t seem to have known about the spy agency either. This begs further questions, and we hope the answers will emerge.”

ALCORA continued to grow until its sudden collapse in 1974, when frustrated army officers in Lisbon grew tired and impatient of the autocratic regime and overthrew Salazar’s successor, Marcelo Caetano during the bloodless “Carnation Revolution.” While the Portuguese military’s top brass had focused on interactions with Rhodesia and South Africa, they failed to notice the collapsing morale of their own officers, de Meneses points out.

“We are left wondering: if the Carnation Revolution had not taken place, how much closer would these three countries have become? Angola, Mozambique, Namibia, South Africa and Rhodesia were combined, a ring of incredibly rich and productive land with gold, diamonds and oil. The alliance was always intended to be open-ended. How far would they have gone to defend this territory and its resources? It is a story of ‘what if’, but it is an intriguing question.”

In the years that followed the collapse of the Portuguese dictatorship and ALCORA, Portugal rapidly abandoned its African colonies. The South Africans and the Rhodesians stumbled from one policy to another. “They had bet heavily on ALCORA and now they didn’t know what to do. There was division: some argued for detente with other African states, while others pushed for more forceful lines of defence and intervention; the latter argument led to South Africa invading Angola in 1975, which in turn invited a Cuban reaction.”

This intervention failed and South Africa withdrew. Shortly after this, it became clear to the black population that the military was not invincible, and the Soweto Uprisings in South Africa heralded the beginning of a wave of popular anti-apartheid protests that eventually sapped the will of the racist state to continue.

In the long-term, ALCORA prolonged Portugal’s colonial wars and the idea of a white-run Rhodesia, and poisoned the region’s politics. “Was there always going to be democracy in southern Africa?” asks de Meneses. “The birth and accidental death of ALCORA suggest that things could have been very different for the region, for Portugal, and for Europe.”