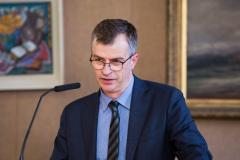 W.H Auden’s poetry is often compared with the work of figures like T.S Eliot and Ezra Pound, but the voice and the influence of Irish literary giant W.B Yeats is evident in some of his most iconic prose – even though Auden refers to Yeats as ‘silly,’ according to Professor Colin Graham, Head of English at Maynooth University.

In particular, we can identify Yeats’s ‘Easter 1916’ as having a strong influence on Auden’s’ ‘September 1, 1939’, with both poems expressing the authors’ reactions and reflections on the political conflicts of their time.

Examining Auden’s ‘September 1st, 1939’, Prof Graham explains that critics tend to compare the poem to T.S Eliot’s ‘The Wasteland’, as both poems begin with the poet observing a city and its inhabitants.

However, Prof Graham argues that Auden’s poem has considerably more in common with Yeats’s ‘Easter 1916’, as the two have an important date as their titles and both begin with the first person ‘I’ – framing the writer as an observer of history at a moment of calm before cataclysmic changes to come.

The title of Yeats’s poem references the 1916 Easter Rising, the failed armed insurrection that would ultimately lead to Ireland’s independence from Britain and radical changes in Yeats’s world, while Auden references the date that Adolf Hitler invaded Poland and the start of the Second World War.

Both poets are writing at the beginning of a conflict, before they can possibly know exactly what is to come. Both poems lament looming war, but cannot offer clear and coherent responses to the violence.
In 1939, Auden wrote an essay in which he imagines a fictional court trying to decide on the legacy of Yeats where the prosecutor comments that it was an achievement for Yeats, in writing ‘Easter, 1916’ to offend neither the Irish Republican or the British Army – an acknowledgment and criticism of the sense of ambiguity evident in Yeats’s work at the time of the Irish revolution.

‘September 1, 1939’, however, offers much of the same sense of ambiguity. Reflecting on the tumultuous world around him and the “unmistakable odour of death” he describes as being in the air, Auden can only offer “ironic points of light” rather than a concrete answer to the violence of World War II.

Prof Graham says: “Auden realised, perceptively early, that ‘Easter 1916’ was not a celebratory poem, a national poem, nor a poem of contrition on Yeats’s part, but a twisting rhetorical strategy to reposition Yeats’s voice. ‘Easter 1916’ reverberates inside ‘September 1, 1939’, so that when Auden’s poem ends with its “ironic points of light” that irony calls on the ambiguity of the end ‘Easter 1916’.”

In looking at the relationship between Auden and Yeats’s work, it is impossible to ignore Auden’s poem ‘In Memory of W.B Yeats.’ It is in this poem where he refers to Yeats as being “silly”, but more importantly, “silly like us”.

Prof Graham says: “When he uses the word ‘silly’ about Yeats, Auden is not just dismissing Yeats. He is referencing his role as a complex, almost paternal, figure that in some ways Auden rejects, but also recognises as someone that tried to comprehend the patterns of history via the language of politics and the private self – navigating all the ambiguities and ‘silliness’ that this entails. If Auden’s Yeats is silly, he is silly like Auden. He is silly to try to contain and comprehend history.” 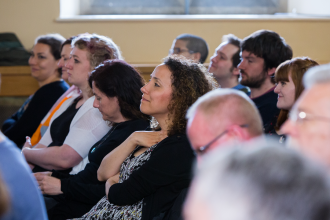 Notably, Auden wrote this poem about Yeats in a way that mimics and even pays homage to the Irish poet’s own style of writing. For example, it has a sectioned structure, with each section adopting a different verse form and tone, just like Yeats’s poem ‘The Tower’.

W.H Auden may have been critical of ‘silly’ Yeats and his legacy at times, but Yeats’s poetry and his attempts to understand and frame history through prose had a clear influence on much of Auden’s poetry, particularly as the latter tried to negotiate the social and political conflicts of his own time.

Professor Colin Graham, Head of the Maynooth University Department of English discussed this in his lecture, Just Auden’s Silly Yeats, on Monday, 14 May, as part of the University’s 2018 series of Professorial Lectures.