The philosophies guiding education: Why student-teacher relationships matter most 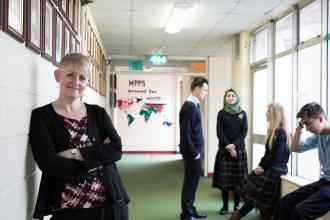 In education, change happens fast.  A new minister seeks to impose their stamp; long-established ways of running schools are, for better or worse, thrown out the window. Curricula are revised to keep up to speed with changing economies and technologies. Business leaders cry out for graduates with the skills they want.

Education formation and transformation
Not surprisingly, these changes are often highly contentious, with parents, politicians, teachers, policy-makers and students often holding very different views on what constitutes the best type of education. That's where Prof Sharon Todd, head of the Department of Education at Maynooth, comes in. With a background in the philosophy of education, she's asking far-reaching questions around education policy, school curricula and how we can have a more equitable education system - and, in the process, slowly transforming how Ireland trains its second-level teachers.

"Education is about formation and about transformation," says Prof Todd. "My research looks at how curricula are written and how the policies or regulations that govern teaching come into being. In this department, we are offering a secular education with an emphasis on social justice. Education is often considered to be based around knowledge but, actually, the relationships between students and teachers are just as important."

Prof Todd has a BA in Art History and a masters degree in the Philosophy of Education from McGill University and a PhD in humanities from Concordia University (all in Quebec, Canada). She taught at York University in Toronto before moving to Stockholm University, where she lectured for 11 years before moving to take up a position at Maynooth University. She has published seven books and written numerous articles for peer-reviewed journals.

Building relationships between students and teachers
Her most significant research work to date is focused on how best to build strong and ethical relationships between students and teachers. "Teachers, especially at second-level, often have very little say in what they have to teach," she says. "They have to deliver a curriculum which does not always address every student; those students can become alienated and disengaged."

It might seem somewhat philosophical and abstract, but this is a problem teachers face all across the world - and it's a problem that demands a solution. "A lot of educational policies are all about how to develop the skills and competencies of students, but it's the relationships with the subject and with teacher that really count. Think of the teachers that mattered to you: it may have been the way they smiled, the attention they gave, how they understood where you were coming from, the passion they had for their subject. That affects how much the student engages."

Students who don't fit into the school system are at risk of being left behind. "A teacher with self-awareness, compassion and the ability to engage with the class can work around the more rigid parts of the curriculum."

Learning to listen
Prof Todd is interested in how teachers listen and respond to their students, so she is planning an observational study into how teachers respond in the fast-paced classroom, with the ultimate aim of helping to build more sustainable classroom relations.

Her research indicates a number of barriers to being able to listen; it should give all of us, not just teachers, pause for thought. "Throughout my career, I have been researching how we respond to minorities and the assumptions ‘we’ make about them. In one project, I explored the different approaches to the wearing of the hijab across classrooms in the UK, France and Sweden. In the UK, students were treated as individuals subject to liberal laws about freedom of religious expression; in Sweden, they refrained from legislation around the hijab, although there was unease about it; in France, it was banned outright. But, despite the radically different approaches taken in the three countries, they had one thing in common: "Nobody was listening to the girls who were wearing the hijab. Nobody was asking them for their opinions on what they wore, so these powerful decisions were being made without any meaningful dialogue with them."

School patronage
When she arrived in Ireland in 2014, she was surprised to see that Ireland not only had no system of public education, but that most Irish people have very little idea what a public education system would involve or how it might look. "A common school, which is the norm throughout most European and North American jurisdictions, is open to everyone, irrespective of what religion or ethnicity you have. In Ireland, however, education is state funded but operated primarily through a patronage system which segregates children. How do we promote a school system that allows different people to live and learn side-by-side while still maintaining respect for diversity? I wouldn't like to see religion removed from schools, but faith formation is a very different practice and should take place outside the classroom."

There's an ongoing debate about the extent of religious control of the Irish school system, but this can't be dismissed as an anti-Catholic opinion; Todd has also been critical of secular patrons as well. "The patronage model is not ideal, so while I really support some of the work Educate Together have been doing in the Irish educational context, it's the patronage system that is the root of the problem. This is a long overdue debate we need to have, and it's about much more than whether or not children have to be baptised to get into schools."

Subject focus
During a research project conducted while working in Sweden, Prof Todd explored how their changed curriculum put an emphasis on scientific and technical subjects at the expense of more creative areas such as creative writing and art. She says that metaphors of business and entrepreneurialism drove the curriculum, and other ways of conceiving of learning were marginalised. Students drifted away from activities that were not formally assessed.

"This entrepreneurial view of education is happening all over the world, but less so in Ireland. We have to consider, as one of my colleagues suggests, that the dominant Catholic ethos of schools may actually have served as a bulwark against a very fast neoliberal invasion of the curriculum. So how do we create schools are not entirely dominated by serving the interests of business while also keeping schools open to diversity?" she asks.

Prof Todd is keen to explore approaches to teaching and, under her leadership, the department is increasingly educating its teachers through group work, collaborations, and seminars. It's all with the aim of speaking to the diverse experiences of pupils and their learning, and if student teachers can experience this, they're more likely to bring this into the classroom themselves. "Ultimately, parents want an educator who cares for and about their child and who has their best interests at heart," she says. "That is what drives our work."