The Ongoing Search for a Cure for Asthma 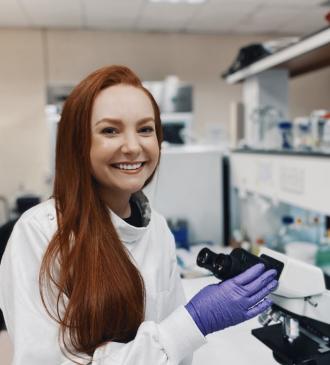 With asthma sufferers identified as at-risk during the Covid-19 crisis, research on how lung cells respond when they meet an asthmatic trigger is especially important, writes Hazel Dunbar, Department of Biology

Ireland currently has the fourth highest prevalence of asthma in the world, which costs the Irish state €472 million per annum. Despite this, severe asthma is commonly over-looked as a life-threatening disease, even though it is the cause of approximately 61 deaths in Ireland every year. According to the HSE and the Asthma Society of Ireland, people with asthma have been classed in the at-risk group for COVID-19, meaning that it is highly important that they manage their respiratory condition during this time.

Asthma is the most common chronic condition in Ireland, where it affects one in 13 people. It's classified as a medical condition which affects the airways, often compromising the natural inhalation and exhalation of air and can develop at any point in life (although it usually arises in childhood). Common symptoms often involve chronic wheezing, chest tightening, coughing and a shortness of breath. The onset of asthma may be triggered by dust, pollution, cigarette smoke or even an atmospheric change in weather. Some families may also have a genetic predisposition for this condition, meaning they will be at an increased risk when they encounter such triggers.
Asthma can be divided into several categories such as allergic, occupational or even exercise-onset broncho-restriction (narrowing of the windpipe), based on the origin of the trigger or allergen. When the airways of an asthmatic become over-sensitive in response to environmental factors, they may experience an asthma attack. An attack is defined as a sudden onset of elevated symptoms, where one could experience a tightening of the chest cavity due to the narrowing of the airways and an overproduction of mucus, resulting in difficulty breathing. In more severe asthmatics, the repetitive wheezing and uncontrolled production of mucus can cause damage and inflammation to the delicate airways by remodelling their structure over time.
People with a compromised immune system, such as the elderly, are at a higher risk of developing this airway-focused condition. The immune system is our body's form of defence against disease and infection. If it is not working correctly, allergens such as dust which we regularly inhale on a daily basis may begin to cause problems within the airways. When the immune system of an asthmatic is compromised, it becomes difficult to maintain a stable form of this condition. Currently, only 60% of the asthmatic population in Ireland have their asthma under control.
There is currently no cure for asthma. However, there are therapies available which act by targeting the associated symptoms and subsequently improve breathing and quality of life. First line treatment for asthma involves the use of an inhaler to deliver steroids, known as corticosteroids, to the lungs.
Inhalers can be categorised as controllers which are brown in colour or relievers which are blue. Controllers are preventative and are taken daily in contrast to relievers, which are only taken when there is an increase of symptoms. These steroids administered through inhalers or nebulisers work to relax the muscles around the airways, allowing them to widen for easier breathing. The problem associated with steroids is that they do not fully resolve the underlying problem within the airways, as their primary function is to aid the reduction of asthmatic symptoms.
Although some steroids can target the cells and muscles within the lungs to alleviate symptoms, they do not have the ability to fully suppress the immune response which is activated through the inhalation of allergens or other triggers. In order to find a cure for this chronic disease, we must understand and resolve the dysregulated immune system associated with asthma at a cellular level. Just like when you see a puddle of water, you wouldn’t mop it up without first checking where it is coming from.
Funded under the Irish Research Council Laureate Award, our goal in the Cellular Immunology Laboratory is to investigate what is happening within the lungs of severe asthmatics through basic fundamental science. We aim to do this by obtaining a thorough understanding of how the cells in the lungs respond when coming face to face with an asthmatic trigger, how they communicate and what they produce.
Our laboratory works on cells known as mesenchymal stromal cells, which are found in our bone marrow, adipose tissue or even in the umbilical cord. These cells are known for their pro-repair and immune-calming effects. This family of cells boast several anti-inflammatory properties, and our laboratory has previously shown that they have the ability to calm the over-reactive immune response linked to asthma.
Our goal is to investigate what is happening within the lungs of severe asthmatics through basic fundamental science
Like humans, the cells in our body have the ability to communicate with each other by releasing signals. Within the lungs of both asthmatics and non-asthmatics, there is a naturally occurring molecule known as macrophage migration inhibitory factor, MIF for short. We know that within the microenvironment of the lung, MIF regularly talks to our cells of interest. Severe asthmatics produce higher levels of this protein, which hypothetically, can be used to our advantage to boost the calming powers of MSCs.
In the future, we hope that our research will help identify a new target which can be used for the development of a novel therapy for severe asthmatics. Only through fully understanding the interactions within the asthmatic lung, will this chronic respiratory condition be treated effectively and efficiently.
Back to top
Back to top