The James Webb Space Telescope: what we know after one week and five images 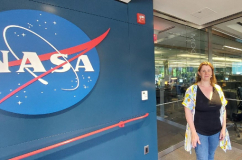 Last week saw new era dawn in our investigation of our universe. After over 20 years of development, setbacks, and budget overruns, the first images were released from the James Webb Space Telescope. The images were beyond anything we in the astrophysics community could have wished for – spectacular and embedded with crucial information that will help us unpick the origins of the Universe and the formation of planets, stars and much more.

As a researcher who investigates star formation, and will use the Webb telescope in January 2023, the potential for discovery is immense. Currently, my team and I conduct our observations using ground-based optical telescopes run by the European Southern Observatory (ESO) high in the mountains of Chile. While we have learnt much from these telescopes, because they are based on Earth, we have to correct for interference from the Earth’s atmosphere. We are also somewhat limited in what we can see because these telescopes primarily capture light within the visible spectrum (the colours of the rainbow). Light at longer wavelengths (infrared) is either partially or fully blocked by the atmosphere. 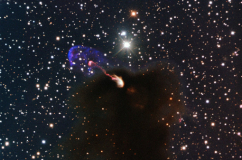 The image (left) of HH 46/47 is of a region in our galaxy, the Milky Way, about 1400 light years (1.32 x 1016km) away in the constellation Vela, where we know there is a young stellar system. The HH stands for Herbig-Haro object. A Herbig-Haro object is formed when a jet of gas ejected by a young star collides and interacts with its parent cloud of gas and dust at several hundred kilometres per second. These highly energetic areas of space are often signposts of star formation. In the centre left of this image, there is a red feature, which we call a jet, emerging from a star-forming cloud.

Currently, we can determine information such as how fast the material in the jet is moving, how dense it is, what elements it is made from, and how it is interacting with the surrounding environment. What we can’t see, because there is a cloud of gas and dust in the way, is the star the jet is coming from. This is one of the limitations of optical telescopes we can’t see all the features that we would like. We know that features like jets, accretion disks around a star, and other factors have a critical role to play in how planets form. But without being able to see past the clouds to the star itself, we can’t determine exactly what’s happening. This is why the Webb telescope is so important. Orbiting the Sun at about 1.6 million kilometres from Earth in the darkness of space, the Webb can take images without interference from light or the Earth’s atmosphere. Unlike optical telescopes, it is super sensitive to a different kind of light –  infrared – that cannot be seen by the human eye. Taking images in infrared will enable us to see through clouds of gas or dust, in super-high resolution, to the stars or planets beyond. 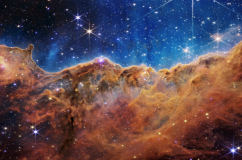 This is one of the reasons why my favourite image of the five released this week is that of the Carina Nebula, in the constellation Carina, located in the Carina–Sagittarius Arm of the Milky Way approximately 8,500 light-years from Earth. In this, we can see emerging stellar nurseries and individual stars that were previously obscured, and other objects in the earliest, rapid phases of star formation that previously had been difficult to capture. This image really showcases Webb’s cameras’ capabilities to peer through cosmic dust, shedding new light on how stars form. To give a sense of scale, if you look closely at the image it appears three-dimensional; the ‘peaks’ of gas at the back of the dust cloud are seven light years high.

Next January my colleagues and I will focus Webb on HH 46/47 to get see the young star hidden by the cloud of gas and dust. We know that jets are intimately related to the process of star formation, but we know very little about their powering mechanism at the time of their formation. With our observations, we will be able to understand what powers the engine of this jet, characterise its innermost structure,  and understand the impact it is having on its surrounding environment. These observations will also yield insight into the other components of the system, i.e. the proto-star itself and its accretion disk -- providing for the first time, a full picture of the star-disk interaction region well before planetary systems are formed around it.

HH 46/47 in the constellation Vela is a star forming area in space of interest to Maynooth University researcher, Prof Emma Whelan. c. ESA/Hubble & NASA, B. Nisini;