It’s all in the flowers 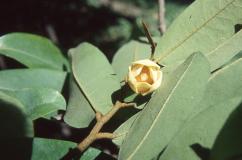 Dr Conor Meade, who leads the Molecular Ecology Laboratory in the Maynooth University Department of Biology, has published a major advance in tropical botany, providing the cover article in the November 2018 edition of Australian Systematic Botany. This new work presents a scientific classification of the widespread Uvaria genus of tropical climbing plants, or lianas.

The work brings together evidence from over 1800 museum specimens, as well as rare historical books, new field collections, evolutionary genetics and computer analysis. Dr Meade’s paper, written with collaborator Professor John Parnell from Trinity College, ties down the origins, diversity and key evolutionary innovations of these plants as they diversified across tropical Asia over the last 20 million years. In all, 33 species are identified, including one, Uvaria vietnamensis, which was first discovered by Dr Meade in 2005. The paper focuses on the species that occur in the geographic region from Western India to the Isthmus of Kra on the Thai-Malay border, including the Himalayas, Southeast Asia and Southern China.

“It’s great to lodge this work in the scientific record, because it tells a small, but very interesting story in the evolution of tropical biodiversity”, said Dr Meade. “We are pretty sure from DNA analysis that Uvaria crossed into Asia from Africa about 20 million years ago, when the ancient lands of the Middle East had a wetter, more tropical climate. What we have been able to do is identify the different groups of species that emerged in the aftermath of this migration, and in fact it’s possible to identify which wave of migration a particular species belongs to - just by looking at its flowers.”

“In the case of Uvaria, the stamens and carpels, which are the male and female parts of the flower respectively, are a dead giveaway – among the species that were the earliest migrants to arrive in Southeast Asia for example, they have quite different types compared to later migrants.”

“This finding had a lovely symmetry to it, because when Carl Linneaus first started to classify these plants back in 1753, he emphasised the importance of the male and female parts of the flower. Some 250 years later, using evidence from state-of-the-art DNA sequences, combined with computer-based analysis of morphological structures - all confirms he was right. That kind of boomerang story is really nice. You see it a lot with the great scientists, their ideas just endure.”

Dr Meade, who was lead researcher and author on the paper, has been working on the project for several years. “This kind of detailed evolutionary analysis, assembling the catalogue of life, is the basis for our understanding of all of nature, and any research in Biology - from agriculture to genetics - ultimately rests on this fundamental classification of organisms.

“What a lot of people don’t realise is that we are still discovering new species all the time. Just as one example, when I was collecting Uvaria along the Mekong Gorge between Thailand and Laos, I spotted a plant on the side of the forest track as we passed in the Jeep and I asked to stop. When we got out and examined it, it looked familiar, but somehow quite strange. Months later, after the expedition was over and I had time to identify the specimen properly – I couldn’t. It turned out to be a new species, unknown to science at that point. So just like that, a new species comes to light.  And week-in, week-out, based on a constant stream of new collections from all over the world, scientists are working to catalogue the bounty of life on Earth.

“But the work takes time and resources, and I am happy that at Maynooth University we can make a small contribution to what is a global effort. With human population increase and climate change, time is not on our side. But it all helps. With this latest paper, we have added to the global record, and we move on – there is always more work to be done.”

Dr Meade will next adapt part of this work to the upcoming Flora of Thailand project to catalogue all the Annonaceae in the region, due for completion in 2019.

Dr Meade lectures in Ecology at Maynooth University Department of Biology. His research interests are in plant biogeography, evolution and ecology, and in 2017 he was a Fulbright International Scholar at the University of Colorado, Boulder. Currently the major project at Dr Meade’s lab focuses on the biogeography and climate adaptation of Arctic-Alpine plants in the Northern Hemisphere.