I see a darkness: shedding light on the dark in medieval Ireland 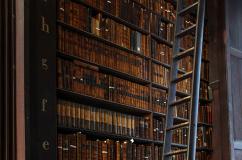 What do you think of when you think of darkness? For some people, it is fear: things that go bump in the night; the unknown; the spooky. For others, it is the possibility of discovery or exploration: space; black holes; dark matter. An international group of academics, researchers and artists recently gathered on the Arctic island of Svalbard – currently engulfed in the dark polar night of winter – to share their expertise on different aspects of the cultural significance of darkness throughout history. Experts have been drawn from all over the world and are speaking on issues as wide-ranging as light pollution, artificial intelligence, architecture and religion.

Irish researchers were at the forefront of the conference: the organiser, Dr Anne Sofia Karhio, is a postdoctoral researcher at NUI Galway. Her assistant, Dr Ciaran McDonough is about to take up a visiting fellowship at Glasgow University Library and is also a NUIG graduate. Speakers at the conference include John Fitzgerald, poet and librarian at University College Cork; Sarah Cullen, an Irish Research Council-funded PhD researcher in the School of English at Trinity College Dublin; and Professor Stephen Matterson, also from TCD’s School of English.

The white language of the Bible
For my own part, I am investigating the way darkness figures in sources from early medieval Ireland (roughly the 7th to the 12th centuries), and in particular the idea of "dark speech". Dark speech is a concept used by medieval Irish writers to describe a highly obscure, elevated type of language used by lawyers, poets and other highly-educated individuals. It might have been used as a way of excluding others from specialist knowledge, a form of elitism perhaps. Or it might have added dramatic weight to important utterances – a sense of theatre which reinforced authority. Early medieval Ireland was a very unequal and hierarchical society and so either explanation – or a combination of both – is credible.

Some sources contrast the dark speech of these elite specialists with the so-called "white language" of the Bible. Of course, the Bible can be a difficult text which requires interpretation, but the implication of this contrast in medieval Ireland seems to be that Christianity was potentially open to everyone, regardless of education, unlike the exclusive domains of law or poetry. For example, the Church was one of the very few career options where advancement could be based on talent rather than on a person’s status inherited from their father and grandfather.

Useful information for pub quizzes
This contrast is not the only significant use of darkness in the earliest sources written in the Irish language. I have also looked at how early Irish authors wrote about their own language and literature. The technical poetic terms for literary devices such as metaphor and allegory – using one image to mean something else – centre on ideas of "shadowiness", "darkening" and, by extension, "obscuration". Relevant medieval Irish words include "forscáithe", "fortched", "dúaithnigud" and "forrúamanda" (this information is unlikely to be useful in pub quizzes, but you never know!).
Therefore, the interpretation of difficult literature in medieval Ireland could often be presented as the opposite phenomenon: making literature "bright’ and therefore "clear".

The same concept is found in modern English: we "shed light on" a subject, or "elucidate" something (literally to make it "light" or "clear"), or we experience a sense of "illumination" when we understand something new. That comparable ideas are expressed in sources written in Irish between the 7th and the 12th centuries is illustrative of the sophisticated ways in which medieval Irish scholars were thinking about their own language and literature: self-conscious, profound and highly articulate.

By bringing the light of explanation, inner layers of meaning could be revealed to a wider audience

So for some writers in early medieval Ireland, darkness represented a kind of specialised knowledge, accessible to only a few members of the elite, who possessed a certain kind of obscure vocabulary. But by bringing the light of explanation, inner layers of meaning could be revealed to a wider audience. That type of explanation (called "exegesis") came from the study of the "white language" of the Bible.

It was dark when I landed in Svalbard and it will remain dark after I left. The snowy landscape, the ice and the fjords remain largely unknown to me because I cannot see them. They are shrouded in darkness. But amidst the polar night, a variety of experts with a range of specialisms are shedding new light on the universal and enduring cultural power of darkness in human history, literature and society.