How will Ireland police the pandemic? 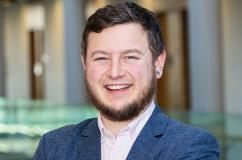 An Garda Síochána have a chance to show that public safety can be maintained through consent rather than enforcement, writes Dr Ian Marder, Department of Law
The Irish criminal justice system has not been immune from the effects of Covid-19. As part of a sector-wide update on April 7th, the criminal courts are now only hearing urgent cases and cases without witnesses, while we will soon see remote video links piloted for some cases. The Irish Prison Service has likewise instituted emergency measures, introducing family video visits in lieu of physical visits and releasing low-risk prisoners from overcrowded conditions. Of course, Ireland is not alone in this, with prison releases and other emergency criminal justice measures taking place all over the world.
Countries have also had decisions to make regarding policing. As more and more countries went into some form of lockdown in March and April, police forces had to decide how to enforce new regulations, while governments considered giving the police new powers to do so. Some countries have since seen a wave of police violence. For example, officers in India, Paraguay, the Philippines and elsewhere have used brute force on people whom they accuse of contravening the new instructions.
Europe, likewise, has witnessed police suppression. The Spanish police have faced accusations of violence and issued many thousands of fines. Police in France and Italy have handed out several hundred thousand fines and charged thousands more people with breaching public health regulations. More recently, forces in England and Wales have given thousands of fines to punish those infringing the lockdown rules.
As with all public services, police forces are facing an unprecedented challenge. Yet, they also have choices to make about how they will seek to safeguard vulnerable populations at this time. Public and political debates often start from the premise that the police's main role is to make arrests and enforce the law. It is widely assumed that this is what the police "should" be doing, because it is the best way to keep "us", the law-abiding majority, safe from "them", the serious criminals.
Yet decades of research show that most police time is spent dealing with non-criminal issues and requests for help from the public, or using persuasion rather than legal powers to respond to the (mostly low-level) incidents they encounter. Public discourse promoting "cracking down" on people who fall foul of the new regulations reflects this persistent myth of the police as "crime fighters".
An "enforcement-first" approach risks damaging police-community relations. This is a problem because people are more likely to respect, cooperate and comply voluntarily with legal authorities that they see as respectful and legitimate. Enforcement also generally fails to solve the underlying issues that cause the social problems to which the police respond.
As such, there is an interesting contrast between the policing approaches in other countries and the stated intentions of An Garda Síochána in respect of policing this crisis. New powers permit the arrest of those who leave their place of residence without a "reasonable excuse". At the same time, the gardaí have also adopted a policy called "the four E’s", in which they should engage, explain and encourage individuals to stick to these guidelines, before resorting to enforcement. The approach still seems to be, at least on paper, to use their new powers as a last resort.
However, questions remain as to what this will look like in practice. How will the gardaí interpret the term "reasonable excuse", which provides the discretionary basis of their new powers? Will the powers be used equitably, or will enforcement be concentrated on working class and minority ethnic populations? Will certain groups feel (or, indeed, actively be) intimated by high-visibility patrols? Garda Commissioner Drew Harris has asked the public to inform gardaí when people break the rules, but what effect might such reporting have on intra-community and police-community relations? Indeed, will we ever know how these powers are being threatened or used if the crisis impedes policing research and accountability?
On April 8th, the Irish Council for Civil Liberties (ICCL) argued that the new powers were unnecessary, given high levels of voluntary compliance. In an email two days later, the ICCL noted reports of increased stop and searches in working class areas. But only seven people were arrested for breaching regulations over the Easter weekend, and one person has been charged.
What would it say about Ireland if the gardaí kept these figures low, especially in contrast to other European countries? How much more good could be done through a public health approach and by investing even more resources in supporting and reaching the most vulnerable, as opposed to adopting zero-tolerance? Some members of the public will be itching for the gardaí to turn to enforcement, and some gardaí might be tempted to use their powers when they feel frustrated. Managers and frontline officers should collaborate with oversight bodies and other stakeholders to ensure that "community policing" narrative is reflected in reality.
Some criminologists have commended Ireland for its limited use of imprisonment relative to other Anglo-American jurisdictions, referring to this as "Hibernian Exceptionalism". On policing this crisis, Ireland has another chance to be exceptional. The gardaí have an opportunity to choose to use new powers sparingly. They can show how, even in these difficult times, policing by consent rather than coercion is both possible and desirable. Much will depend on An Garda Síochána’s use of discretion over the coming months.
Back to top
Back to top