Is Digital Poetry Moving Us Online?

Is Digital Poetry Moving Us Online?

Ireland: famous for its rich literary tradition, throwing up global heavyweights from WB Yeats to Seamus Heaney and James Joyce to John Banville.

Ireland: famous for its rich artistic heritage, from the Book of Kells to the Academy Award nominated animated feature, The Secret of Kells.

Ireland today boasts a thriving digital sector with corporate behemoths such as Facebook and Google alongside smaller, indigenous creatives such as Brown Bag Animations. Somewhere at an unexpected and decidedly modern crossroads, the literary and artistic traditions are meeting with the digital, and when they dance here, a world of possibilities opens up. 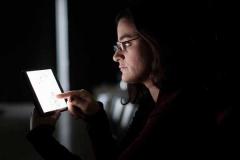 Dr Jeneen Naji, a Lecturer in Digital Media at Maynooth University ’s Centre for Media Studies, is among a small but growing band of academics who are just beginning to feel their way around this expanding and potentially infinite space for digital literature, especially digital poetry.

Does the word “digital” mean anything significant to literature in general, and poetry in particular? “A traditional, printed poem is immutable, fixed, but it can be more responsive and changeable on the computer,” Dr. Naji explains. “Whereas a traditional poem is a static object that does not change, there is more potential – for good and bad – in the digital space. For younger generations, the idea of a digital poem is not something novel: they have grown up with digital culture.

So is a digital poem just a poem that is read on a computer? “It can be, but it can be more,” says Naji. “There is, for a start, a greater range of media to draw from, including visuals, text, graphics, audio, and interactivity. Some digital poems might contain hyperlinks in the text. Some might be played out, with actors performing in the parts.”

A popular digital poem to date is “Ten Doors Closing”, described by its author, Dylan Sheehan, as “a poetry driven story set on the London Underground.” This is no ordinary poem, as it is accompanied by a very engaging and visual arresting short film, and it has had over 40,000 YouTube views. Sheehan is no ordinary poet: he is also a freelance video editor, animator, and director of independent film company FlyFaction.

Another digital poem, The Dead, by American poet Billy Collins (US Poet Laureate, 2001-03), was set to an animation which remains quite true to the original text:

The dead are always looking down on us, they say.
While we are putting on our shoes or making a sandwich,
they are looking down through the glass bottom boats of heaven
as they row themselves slowly through eternity.

They watch the tops of our heads moving below on earth,
and when we lie down in a field or on a couch,
drugged perhaps by the hum of a long afternoon,
they think we are looking back at them,
which makes them lift their oars and fall silent
and wait, like parents, for us to close our eyes.

Naji contrasts this translation of Collins’ poem with another of his works, The Best Cigarette, which is also set to an animated video. The latter video, however, uses less prescriptive imagery, allowing the audience greater freedom to interpret it for themselves.

The Dead has received almost 850,000 YouTube views, while The Best Cigarette has received 227,000. Does their relative popularity signal what the audience for digital poetry is looking for, or should the two even be compared at all? Isn’t poetry all about imagining, and does a film not take away this crucial part of the poetic experience? These are among the questions for explorers of this very new world, such as Naji.

“Where the imagery in a film is less proscriptive, this gives more space for the mental process of imagining or visualising the images," says Naji. "It would be interesting to see which poem is preferred.”

Not all digital poems – indeed, not even a majority – are cinematic. “I’m very interested in the audio aspect of digital poetry,” says Naji. “For example, a poem called Fallow, originally written by Rebecca Givens and brought to the digital sphere by Monica Ong, is effective because it follows a gentle rhythm and doesn’t require excessive interaction. It is highly evocative and shows what can be achieved with the medium.”

At its most basic, a digital poem becomes digital if it is simply read on a computer screen rather than a printed page. Why is this worthy of study? “The digital poem may contain hyperlinks, or it may not, but the very act of putting the poem on a computer changes it. Who are digital poets and why are they publishing online? Why is it that digital poets usually tend to start in the digital?”

Naji, working with two of her students, made an app with English, Irish, and Arabic versions of a poem. The app allows readers to switch between versions of the text, with linked images associated with certain words. It is, she explains, a chance to play around with translation and language while offering a novel experience to the reader.

Digital poetry reminds us of the creative possibilities of technology. It means that talents who may have struggled to get their poems in print, and distributed to an audience, now have a new tool at their disposal. Conversely, it also means that the curator and the editor become less important, which could open a floodgate of turgid dross. The reader is left to discern the best material by themselves.

For Naji, the really interesting question is what digital poetry can tell us about how we interact with computers, as well as our emotional responses to online content.

Compared to the long and distinguished history of traditional poetry, which evolved with us from the beginnings of human culture and language, digital poetry is just a day-old babe. The potential of the imagined worlds of poetry in the new era of artificial intelligence and computer-based worlds is infinite. Ultimately, Naji is an explorer on the forefront of a new and exciting place of imagination.