Colin the Caterpillar and the curious case of IP rights 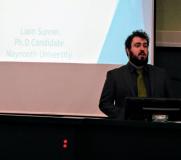 Colin the Caterpillar and the curious case of IP rights

Whether we are aware of it or not, the development and application of intellectual property (IP) law is a constant and consistent feature in our everyday lives. From branding to media, from the toilet roll holders to cheeses in the fridge, elements of IP are everywhere.

As a result, the conflict of IP law historically reserved to courtrooms is entering our lives with an ever increasing frequency and in more striking ways. A recent example of this process relates to the current dispute regarding the Colin the Caterpillar cake sold in Marks and Spencer.

Marks and Spencer have sold Colin the Caterpillar cakes for roughly 30 years, his appearance has been relatively unchanged since 2004, save for some variations on holidays or calendar events such as Halloween or Christmas. As such, we can say that Colin has a consistent appearance over this period.

This is significant for a number of reasons, firstly, for the brand recognition power and sellability associated with Colin. Secondly, the perception and consistency of the quality associated with Colin. Thirdly, this has allowed Marks and Spencer to file and receive numerous trademarks regarding Colin. While the three points are related, it is useful to examine each separately.

The first two points relate to the broad marketability of Colin, something Marks and Spencer have stated they will protect "because we know the M&S brand is special to our customers and they expect only the very best from us, love and care goes into every M&S product on our shelves."

As a result, Marks and Spencer have taken legal action against a competitor, Aldi, to protect "our reputation for freshness, quality, innovation and value." This is where the issue regarding Colin and his copies becomes complex.

As mentioned above, Marks and Spencer currently hold a number of trademarks in relation to Colin. This protection was awarded by the EUIPO and within the UK in 2020 following its exit from the EU.

Again, in the context of Colin, he has been on sale for roughly 30 years and forms a strong selling point as part of the Marks and Spencer branding. Additionally, his use is seen to be central to Marks and Spencer's partnership with the charity Macmillain. Therefore, the use of the trademark is both economically active and in good faith.

However, the existence of this protection hasn’t stopped rival supermarkets from creating their own versions of Colin. In doing so, following a similar style of cake, packaging, and naming convention, this raises the question of whether there has been an infringement of the trademarks owned by Marks and Spencer.

This isn’t the first-time supermarkets have copied, to varying degrees, the products of another supermarket. Nor is it the first time Aldi have faced legal action for similar infringement.

This copying is the heart of the issue, copying at such a level and in suc a direct manner that it implies a similarity in quality between the products. And this is the heart of trademark, that it exists to protect the consumer from confusion between products.

Assessing the alleged infringement, Marks and Spencer would seek to examine the likelihood of confusion between the two, which as mentioned above is visually and thematically similar. As such, it would be likely that there would some grounds for confusion.

Additionally, Marks and Spencer could seek an injunction to prevent the continued and further sale of the counterfeit Colin. However, this presents an interesting position if the Court finds in favour of Marks and Spencer, would they continue against other supermarkets who manufacture Colin-derived cake and why focus solely on Aldi at this point?

Success in court would likely favour Marks and Spencer in future instances of infringement, but it could also serve as an incentive for other supermarkets to remove their counterfeit Colins in advance of the issue.