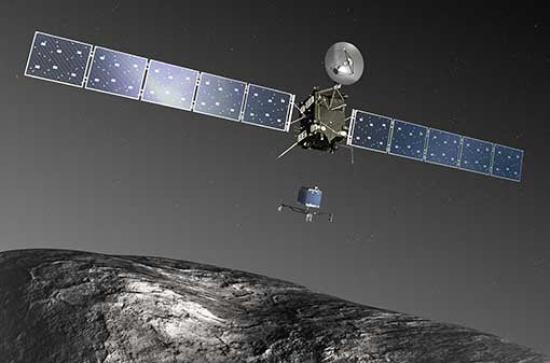 Scientists from Maynooth University have played a key role in the Rosetta Mission, which today made history by landing its Philae probe on a comet when it touched down on Comet 67P/Churyumov–Gerasimenko.

Susan McKenna-Lawlor, Professor Emeritus, is a director of the company Space Technology Ireland Ltd (STIL) which designed, constructed and tested the onboard Electrical Support System (ESS) processor unit, a system which will play a key role in passing the streams of commands and data between the Rosetta spacecraft and the instruments on the Lander. Since the success of the Lander depends on the successful acquisition of scientific data from the comet nucleus, the ESS is defined to be mission critical hardware. Professor McKenna-Lawlor is currently at the mission control centre at the DLR German Aerospace Centre.

Laurence O’Rourke, who is the ESA lander systems engineer and a key scientist involved in the Rosetta mission, is a graduate of Experimental Physics at Maynooth University.

The Rosetta mission has been under way for more than two decades: from agreement in 1993 through launch in 2004 to having a satellite in position above Comet 67P/Churyumov-Gerasimenko. Rosetta was launched in March 2004 and reached the comet in August 2014 becoming the first spacecraft to orbit a comet. The spacecraft consists of two main elements: the Rosetta space probe orbiter, which features 12 instruments, and the Philae robotic lander, with an additional nine instruments.

Although we have landed on planets, moons and asteroids, it has never been attempted for a nucleus of a comet, which have a very low gravity, are loosely composed of ice, dust and rocks, and are very irregular in shape.