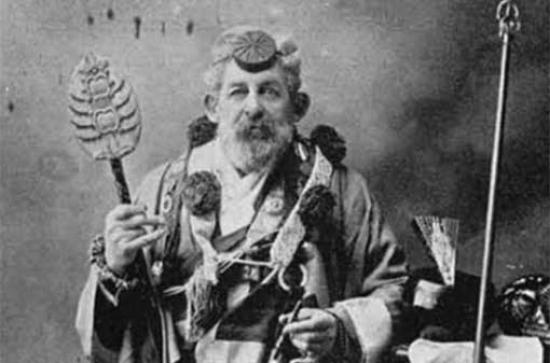 Research by academics at Maynooth University and colleagues at University College Cork (UCC) and Maizuru National College of Technology in Japan has discovered that the first Buddhist mission to the West occurred in 1889, a decade earlier than was previously thought, and was led by an Irish-born Japanese Buddhist named Charles Pfoundes, born Charles James William Pounds in 1840 in the South East of Ireland to Irish Anglican parents.

The research by Dr Laurence Cox of Maynooth University, Prof Yoshinga Shin’ichi of Maizuru National College of Technology and Prof Brian Bocking of UCC was published recently in the British Association for the Study of Religion’s journal, DISKUS. Until now it was assumed that the earliest Buddhist missions to the West were those to California beginning in 1899, and that the first Buddhist mission to Europe was Ananda Metteyya’s 1908 mission to London, which is often presented as the beginning of Buddhism as a religion in the UK.

The researchers found that in 1889, Pfoundes became the official London representative of the Japanese ‘Buddhist Propagation Society,’ and from a base in Westminster he focused his skills and energies on the propagation of Buddhism. The Buddhist Propagation Society was founded in 1887 with an initial purpose to spread Buddhism internationally through correspondence and publications. Pfoundes lectured weekly at a variety of locations across London, but also ventured to locations further afield, such as Sheffield. He would solicit public invitations to speak on the subject, and many of his engagements took place in spiritualist meeting halls or branches of the National Secular Society.

One of Pfoundes’ key arguments was that Theosophy was not authentic Buddhism, contradicting others who were popular on the free-thought circuit, such as celebrity activist Annie Besant. For a multitude of reasons the propagation of Buddhism did not work as hoped and Pfoundes himself was quoted as saying: “There is no one who is openly committed to our movement. [However] there are many who regularly attend my meeting.” In 1892 Pfoundes left for Kobe, Japan, never to return to Europe and the conclusion of the Buddhist Propagation Society’s mission to London.

Discussing the research, Dr Cox said: “Although Pfoundes saw his mission as a failure, thousands of people heard him speak during his three years as a missionary, and it is likely that some later converts were among his audiences – even perhaps the young man who would become Ananda Metteyya. Because he returned to Asia and died in Kobe, his pioneering mission was forgotten for over 120 years, while Ananda Metteyya’s visit almost two decades later came to be remembered as the first mission to the West.”

Charles Pfoundes was born Charles James William Pounds in 1840 in the South East of Ireland to Irish Anglican parents who were bankrupted during the Famine. He emigrated to Australia at age 14 and joined the navy. He first travelled to Japan in the 1860s after serving in the Siamese navy, remaining there for 12 years before his return to the West and the London Buddhist mission. On returning to Japan he was initiated into various Buddhist traditions. Charles Pfoundes died in 1907 in Kobe.