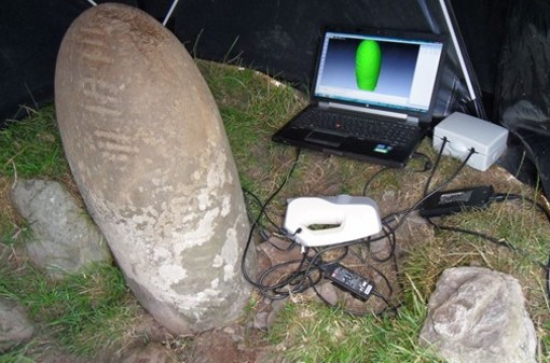 Academics from Ireland and Scotland are harnessing cutting-edge digital and 3D technologies to help to protect the inscriptions and transform our understanding of the ancient Celtic Ogham writing system, it was announced today (4 August 2021).

Ogham was invented over 1500 years ago and is found in the Republic of Ireland and across the four nations of Britain, and the Isle of Man. Ogham is an alphabet that appears on monumental inscriptions and occasionally portable objects dating from the 4th century AD onwards, and in a handful of manuscripts dating from the 9th century onwards.

The majority of these are from Ireland, but nearly a third are found across England, Wales, Scotland, and the Isle of Man. These inscriptions are the oldest written records in the language ancestral to Modern Irish, Scottish Gaelic and Manx.

Only 16% of surviving Ogham-carved stone pillar are housed in national museums, with the vast majority remaining locally in churches, heritage centres or remote rural locations exposed to the elements.

Now a major three-year interdisciplinary project, led by academics from Maynooth University and the University of Glasgow, will create a comprehensive digital online database of all 640 pre-1850 examples of Ogham script which will be easily accessible to scholars and the public alike.

The project will break new ground in looking at Ogham in all media and all periods, and giving Ogham in Britain due weight alongside Ogham in Ireland.

It will build on the Dublin Institute for Advanced Studies (DIAS) Ogham in 3D project (2012-15), which focused primarily on Ogham pillars in state care in the Republic of Ireland. It was always hoped, not just to complete the corpus of Irish stones, but to collaborate with colleagues in Britain to include Ogham from all areas and on all types of supports. Now, finally, this can be done.

The academics will collaborate with the National Museums of Scotland, Ireland, and Wales, the British Museum, Manx National Heritage, Historic Environment Scotland, Wales’s Cadw, Ireland’s National Monuments Service, and the National Library of Scotland – all of whom have examples of Ogham in their care. They will also work with Ireland’s Discovery Programme to create 3D digital models to enhance access to, understanding of, and engagement with, this unique cultural heritage. The 3D models produced by the project will also provide a baseline against which future weathering can be assessed, contributing to the protection of a unique archaeological resource threatened by climate change.

Professor David Stifter, Professor of Old Irish at Maynooth University, said: “The collaboration of a diverse and international team of epigraphers, archaeologists, linguists and philologists allows us to ask research questions that will contribute to a holistic picture of the history of the Ogham script. We hope to get a better understanding of its meaning as a cultural expression of Gaelic intellectual history way beyond the narrow group of Irish “orthodox inscriptions”.”

Professor Katherine Forsyth, Professor of Celtic Studies at the University of Glasgow’s School of Humanities, said: “Everyone’s heard of runes, but not so many people are familiar with Ogham, a highly unusual and amazingly clever writing system unique to these islands. We hope this project will help change that and bring Ogham to the wider attention it deserves.”

Despite its earlier origin, Ogham script stayed in use after the establishment of Christianity brought literacy in the form of Latin script written across a flat page. Despite the rapid dominance of this new way of writing, Ogham was never entirely abandoned. The post-7th century phases of the script have been little studied, but their geographical and functional diversity indicates Ogham retained and expanded its use, value, and appeal, particularly among lay people.

Previous assumptions that practical knowledge of the script had entirely withered by the early modern period have been overturned by recent discoveries in medical manuscripts and other sources, including, astonishingly, a newly discovered 66-page Irish manuscript from 1849 in the National Library of Scotland which contains medical charms written entirely in Ogham.

Today the Ogham script has seen an explosion of popular interest including innovative artworks by Irish and Welsh artists, musical compositions, and in jewellery and tattoos. Project team members are regularly approached by individuals and businesses looking for advice on using Ogham: there’s a clear need for accurate and authentic information about the script which is accessible to a non-specialist audience and empowers them to adapt Ogham to contemporary needs.

As well as providing resources for scholars, the project will also support Ogham in contemporary use offering guidance for writing the script and using Ogham fonts.

It is hoped that it will help inspire new creative and artistic works which will keep Ogham relevant for the 21st century and digital age. This will include an exciting collaboration between Professor Forsyth and tattoo artists to produce an Ogham Tattoo Handbook for Bradan Press’s popular ‘Think before you ink’ series.