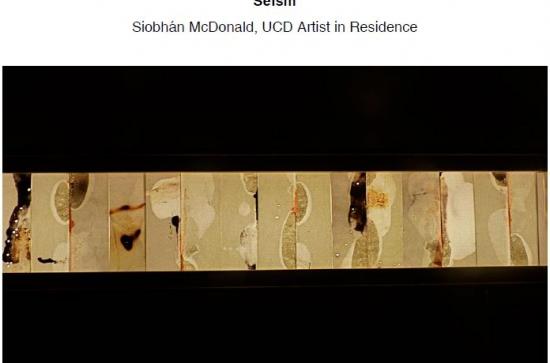 In August, an Irish team of scientists from University College Dublin set off on an expedition to the Vatnajökull glacier in Iceland. Siobhán McDonald, as UCD Artist in Residence, joined the team of scientists to the summit. Their mission was to place an array of seismometers along the flanks of Grimsvotn, an active volcano that sits at the edge of the glacier, and record the tremors and rumbles that occur deep below the glacial ice. The idea is that by listening closely to the “heartbeat” of Grimsvotn, the team might learn more about the inner workings of the volcano, and perhaps gain some useful information to help detect the early signs of an eruption. Their trip was part of Futurevolc, an international project funded by the European Commission, coordinated by the University of Iceland, the Iceland Met Office, and UCD geologists. Futurevolc’s goal is to improve the monitoring and evaluation of volcanic hazards. Iceland is a rich source of such hazards, as the rest of Europe discovered in 2010 when the Eyjafjallajokull volcano spewed out a giant ash cloud that brought massive disruption to air travel. For this talk, McDonald will discuss the expedition in relation to the making of a recent commission for the New Science Centre at UCD, a sound piece made in collaboration with UCD Geology Professor Chris Bean and the internationally acclaimed composer Susan Stenger.

Siobhán McDonald’s practice draws on making visible the invisible, by creating tangible responses to forces that are not immediately apparent (www.siobhanmcdonald.com). An interest in geology and seismology strongly informs her work, allowing her to map imperceptible movements of the Earth, subtly manifesting links to both physical locations and to particular moments in time. McDonald also looks to Iceland -- its state of flux and change, and its constant erasure and recreation of history.