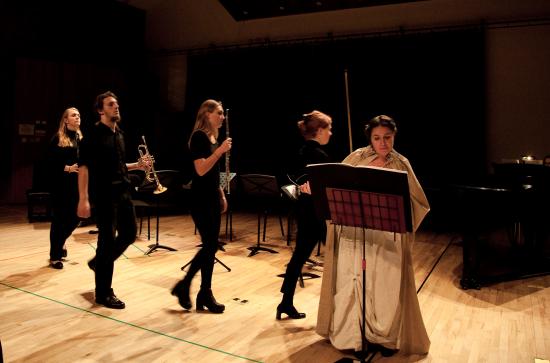 Francesca Placanica in one of the productions of "En-Gendering Monodrama".

The IRC funded project "En-Gendering Monodrama", led by Dr Francesca Placanica and hosted at the Department of Music under Prof. Christopher Morris' mentorship, will be presented at the American Comparative Literature Association Conference at Harvard University in March 2016. Dr Placanica's paper on Morton Feldman’s Neither which explores vocality and posthumanist aesthetics, will be part of the panel Posthumanist Vocality II and is expected to be delivered on March 19. In particular, the paper will explore issues of embodied practice and vocality.

Neither self nor unself: the aporìa of a posthuman vocality in Feldman’s and Beckett’s monodrama.

“I certainly know more than anyone else in my generation what the ‘self’ is in terms of personal music. I had to invent the ‘unself’. I saw the ‘unself’as a very detached, impersonal, perfect type of machinery.” [1] (Feldman, 1977)

In 1976, a reciprocal aesthetic agreement between Feldman and Beckett manifested through the composition of Neither, premiered at the Rome Opera in 1977. Being de facto a monodrama for one soprano and orchestra, Neither synthesized Feldman’s disdain for opera and Beckett’s contempt for the musical setting of his texts. In Neither, the lines: ‘to and fro in shadow/ from inner to outer shadow/ from impenetrable self to impenetrable unself/ by way of neither’ proved in fact programmatic for Feldman’s musical work.

By shunning structured interactions between text and music, Neither forecasts on voice a spectral quality that eschews temporality, corporeality and space.  The soprano voice reiterates single tones and odd melismatic patterns, while the various polyrhythmic disruptions of pulse musically recreate “something that just hovered”, a requirement expressed by Beckett and embraced by Feldman (Laws, 1996, 196). The female voice is thus “technologically” deployed to evoke existentialist amazement, prolonged elusiveness of the present, and finally the acceptance of the non-existence of a stable definition. This paper reflects on posthumanism as praxis, and interrogates the contradiction existing between the programmatic multiple disembodiments extant in Neither and its actual performative nature. In order to portray the destabilizing dialectic of ‘self’ and ‘unself’, Neither relinquishes dramaturgical form, consequentiality and performativity. Yet the ways in which this “between-ness” is substantiated through voice is vitally dependant on its actual enactment, and ultimately on the unique bodily and intellectual labour of the solo performer, the only medium and creative agent of these disembodying acts.

Performance, Practice & Interactivity
Back to top