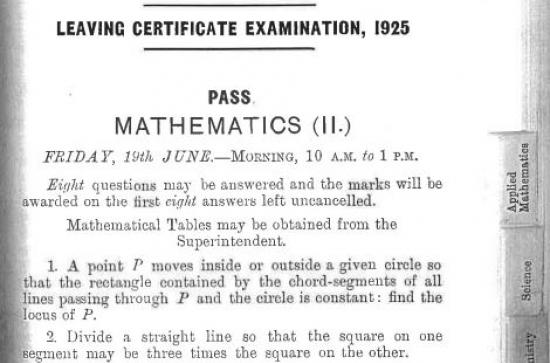 Former students often declare that the Leaving Cert was much harder in the past, but what were the exams actually like?

Sparked into action by a Twitter-based claim that someone had studied differentiation and complex numbers for Inter Cert Mathematics in the 1980s (they hadn't!), the Mathematics and Statistics Department in Maynooth University has been collecting Leaving Cert and Junior Cert exams to investigate the issue.

Over the past 18 months, Dr David Malone and Ms Hazel Murray of the Maynooth University Hamilton Institute have collected many of the STEM exam papers from 1925 to present day. Why 1925? Well, that's the first year the Leaving Cert and Inter Cert were examined by the then recently-formed Department of Education.

Dr Malone commented: “To compile the archive we have had to visit various libraries, including the Trinity College Library and the National Library of Ireland. Interestingly, some of the biggest gaps are recent, when the issuing of a full book of all state exams went out of fashion before modern exams were made available electronically on www.examinations.ie.

“The State Examinations Commission have been able to provide us with access to some of the more elusive exam papers, and final gaps are being filled with help of teachers/students around the country who have stashes of old exam papers in their attics. If anyone may be able to fill in any of the gaps, the Maynooth Maths department would love to hear from you.”

“While we haven't been able to track down the reasoning behind separate questions in all cases, in one case we've found that girls-only maths exams were introduced in the 1930s to try to increase the participation of girls in STEM, an issue we are still working on today,” said Dr Malone. “The elementary maths was to encourage more girls to take maths for longer, which would provide more female teachers who could teach maths in girls’ schools.”

During the 1940s, there was a period where the subject examiner was listed on the Irish versions of the exam papers. The examiners include some well-known names like Prof Máirín de Valéra, daughter of Éamon de Valera, who was the examiner for Botany. Similarly, Cormac Ó Ceallaigh , one of the most distinguished Irish scientists of this century, was the examiner in Physics who subsequently became Professor at the Dublin Institute for Advanced Studies.

The papers are all freely available here.

On Thursday, 16 November, Dr David Malone and Ms Hazel Murray will deliver a talk entitled, “It was all much easier when I was young: Science and the Leaving Cert” as part of Maynooth University’s Science Week. The lecture will take place in the Iontas Building at 7:00pm.

More information on the event is available here.