Hello everyone. We are disappointed that we cannot welcome the 1000’s of young people and their parents and guardians on campus this year for our MU Science Week. We will miss the excitement of the audience at our Open Science Labs and at our Robotics Challenges, but hopefully we will see you back on campus for Science Week 2022.  But for this year please enjoy our fantastic online events.

‘In conversation with Prof. Luke O’Neill and Dr. Ciara Kelly: Following and Telling the Science of Covid 19’ event chaired by Prof Paul Moynagh that took place in Maynooth University on 16th November.

http://dojomor.ie/The Computer Science Department at Maynooth University is delighted once again to be involved in Dojo Mór – visit us at the virtual fair!
For one day only, 20,000 students, from primary and secondary schools around Ireland, will learn how to code in a fun, exciting virtual environment. Free coding workshops from DojoMór 2021, funded by the Higher Education Authority of Ireland, will be running online, from 10am to 2pm, Saturday 6th November 2021, offering a range of activities and amusements to suit all ages and interests. 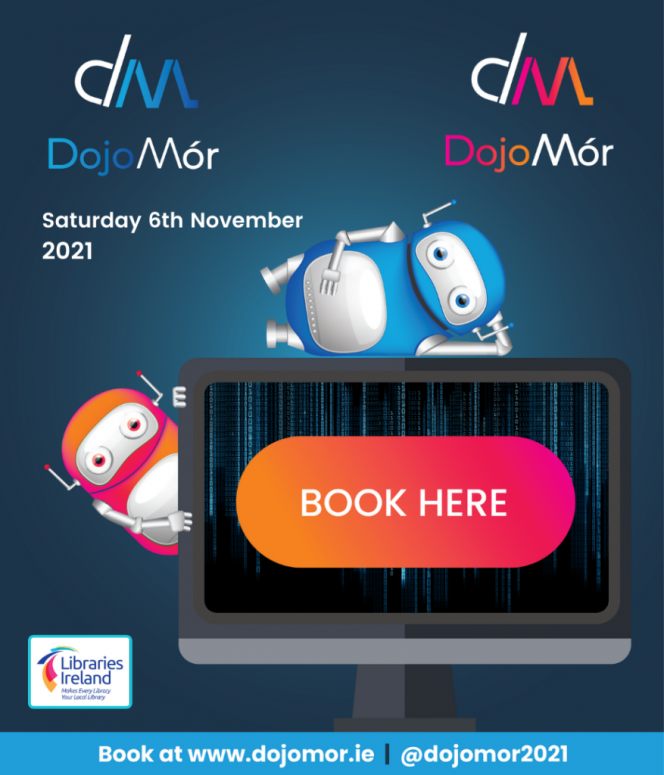 The Wonderful World of Soapy Surfaces Tuesday 9 Nov 10 - 11am

Join Dr Mark Walsh from Maynooth University to discover all about bubbles!!! Why are soap bubbles round? If a piece of wire, closed into a loop, is dipped in soapy water, what determines the shape of the soap film formed? What happens if we replace the wire loop with a more complicated shape: a wire cube, a pyramid etc? Behind the answers to these questions are fundamental Mathematical principles. These concern basic notions from geometry: shape, area and curvature. Intuitively, these principles are quite simple to understand. However, when applied in practice, they can lead to some surprising and beautiful results! In this talk, we will make use of some basic household supplies and a little geometry to explore the wonderful world of soap films!

About Mark: Dr Mark Walsh is a Lecturer in Mathematics at Maynooth University, specialising in the areas of Geometry and Topology. Before joining Maynooth in 2017, he was Associate Professor of Mathematics at Wichita University, Kansas, USA. Dr Walsh also spent time at WWU Muenster, Germany as well as Oregon State University, USA and the University of Oregon, USA, where he obtained his doctorate in 2009. Dr. Walsh is originally from Leixlip and attended Scoil Eoin Phoil and Colasite Chiarain, before completing his undergraduate and master's studies at Maynooth University.
This demonstration is open to aimed at 4th, 5th and 6th primary school classes and will include some elementary Mathematical content, mostly in picture form.
Booking at https://app.geckoform.com/public/#/modern/FOEU025bKL1A5IjE 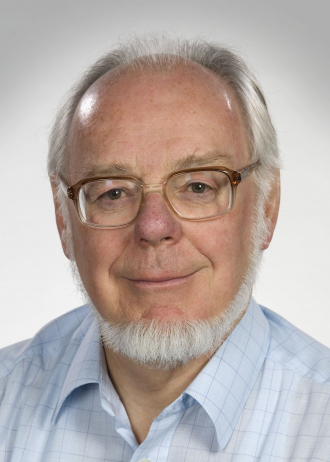 An Irish origin of Modern Computers: Investigating the Work and Life of Percy Ludgate (1883-1922).

The forerunner of all modern digital computers is the giant mechanical "Analytical Engine" that the famed English mathematician, philosopher and engineer Charles Babbage designed starting in 1837. It was to be over a hundred years before the first computers were successfully built - by which time electronic valves could be used rather than mechanical gears. Percy Edwin Ludgate is notable as the second person during this one-hundred-year gap to publish a design for what he called his Analytical Machine. Ludgates' paper describing his design for a programmable mechanical computer was published in 1909 by the Royal Dublin Society but attracted little attention and was soon largely forgotten. Some fifty years ago I rediscovered Ludgate's paper and undertook a first investigation of his life and his very innovative work. In this talk I will describe the results of the first investigation into the life and work of Percy Ludgate since my 1971 paper on him. This major investigation, led by Dr. Brian Coghlan of Trinity College Dublin, has through much diligent effort uncovered a range of new material, and has made two significant discoveries. One of these concerns Ludgate’s machine and the other his family.
Brian Randell graduated in Mathematics from Imperial College, London in 1957 and joined the English Electric Company where he led a team that implemented a number of compilers, including the Whetstone KDF9 Algol compiler. From 1964 to 1969 he was with IBM in the United States, mainly at the IBM T.J. Watson Research Center, working on operating systems, the design of ultra-high-speed computers and computing system design methodology. He then became Professor of Computing Science at Newcastle University, where he was Director of Research, and led a number
of research projects in reliability and security, including a series of major collaborative EU-funded projects.  He has published nearly three hundred technical papers and reports and is co-author or editor of seven books. He is now Emeritus Professor of Computing Science, and Senior Research Investigator, at Newcastle University. He was a Member of the Conseil Scientifique of the CNRS, France (2001-5), and Chair of the IEEE John von Neumann Medal Committee (2003-5), and a Member and then Chair of the ACM A.M. Turing Award Committee (2005-9). He has received a D.Sc. from the University of London, Honorary Doctorates from the University of Rennes, and the Institut National Polytechnique of Toulouse, France, and the IEEE Emanuel R. Piore 2002 Award. He has during this time also had an active research interest in the history of computing, resulting in the re-discovery of Percy Ludgate, the unveiling of the special purpose Colossus computer used for wartime code-breaking at Bletchley Park, and the book "The Origins of Digital Computers".

What are black holes? How did they form? How did our Universe begin and how will it end? A Masterclass for 5th & 6th year students.

Pretengineering - How a summer spent surfing led to a PhD 9th Nov at 12.00

'Do Statisticians Have Superpowers'

Over 2700 TY and LC Maths classes from 70 schools all over Ireland were logged on to the Maynooth University Maths Week talk delivered by Dr Rafael de Andrade Moral on 21 October 2021. Rafael de Andrade Moral is an Assistant Professor of Statistics at Maynooth University since 2018, after completing a BSc in Biology and an MSc and PhD in Statistics at University of São Paulo, Brazil. He is very interested in applying mathematical and statistical tools to solve real-world problems linked to Biology, Ecology, and Environmental Science. He is also passionate about developing new ways to teach Statistics using music (see https://tinyurl.com/rafamoral). In his spare time, he loves playing with his animals, which include three German Shepherds and two mini-lop bunnies.

In his talk, Rafael covered what Mathematics and Statistics are, and why it is a good idea to study these subjects. He also talked about Data Science and Machine Learning, and how we can use these tools to develop Artificial Intelligence. He included a couple of demonstrations to show how randomness affects our daily lives, and how probability theory can help us make sense of it.

The event was recorded and can be viewed at the following link - it is a great resource for any science, maths or career guidance class.

Book a MU STEM school talk
Open to 5th and 6th year Leaving Cert students, have a live webinar in your classroom with our STEM representative who will talk to you about all the STEM courses available at Maynooth University.
Teachers and Guidance Counsellors can book via email ita.mcguigan@mu.ie

Listen to the Dean of the Faculty of Science and Engineering, Prof Ronan Farrell, to learn more about the STEM programmes available at Maynooth University

Bebras Computational Thinking Tasks for Secondary Schools
Wednesday 10th Nov 2021 | 9:45am - 11:15
Duration: 15 min - 90 min, class can join anytime, new computational thinking task presented in every 15 minutes
Venue: online Zoom (link will be emailed to those who register on Tuesday 9th November)
Audience - All secondary years, suitable for CS, Maths, and Science
This computational thinking event is intended for secondary school students. Together, we will solve six secondary school level Bebras tasks via Zoom. The event will start at 9:45 and last for 90 minutes. During each 15-minute interval we will solve a new task, giving time for discussion and feedback from participants. Teachers/classes can join in for any part, or all, of the 90 minutes. Teachers/classes can participate using the chat function in Zoom.
We will be using tasks from previous years of the International Bebras Challenge, so any classes that intend to take part in this year's Irish Bebras Challenge can use this as an opportunity to practice for the Challenge! (https://bebras.techweek.ie/).
The six tasks will be available for teachers to download from Monday 8th November from the PACT website (https://pact.cs.nuim.ie/resources).
The event will be run by the PACT team, Department of Computer Science, Maynooth University. 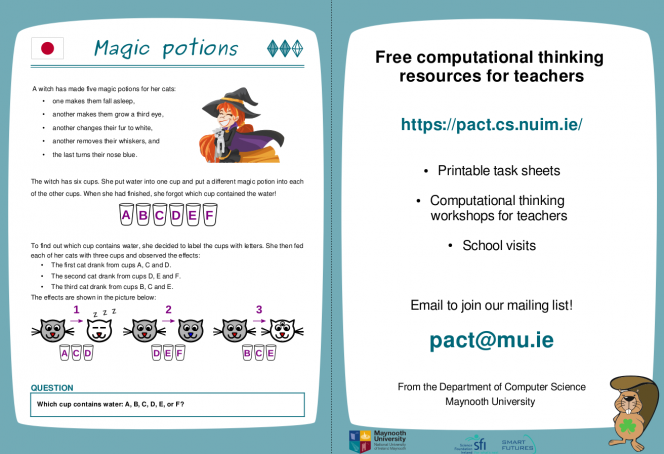