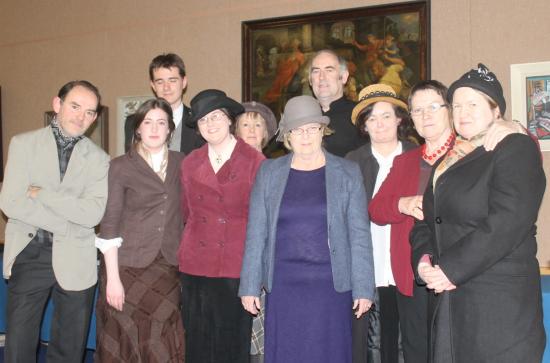 A highly commended reading of this much-acclaimed play was presented by members of the Maynooth University Student History Society in association with the Department of History on Thursday 21 April 2016 in Renehan Hall (South Campus). The lead role of the Countess was played by Zöe Rogers (third year) and that of the Prosecutor, by Ryan Heerey (second year). Other roles were played by Sean Neary (Constable Lahiff, Judge), Cora McDonagh (Helena Molony), Brodrick O’Neill (William O’Brien), Geraldine Wilson (Kathleen Lynn), Ailbhe Rogers (Margaret Skinnider), Maeve Ann Mullin (Mrs Lahiff) and Ann Bergin (Nurse Geraldine Fitzgerald). The playwright, Ann Matthews is pictured here with members of the cast. The play was directed by Ryan Heerey and Jacinta Prunty.

This reading by members of the MU Student History Society, with the support of the Department of History and of the Maynooth University Decade of Commemorations, was the first part of the larger event at the same venue (4pm), titled, ‘1916-2016, Women in Ireland, Then and Now, through the lens of Countess Markievicz’, organised and chaired by Dr Margaret Murphy of the Sociology Department.
Centred around Constance Markievicz (née Gore Booth), the play recalls an event in Dublin on Easter Monday, 24 April 1916, when a policeman, Constable Michael Lahiff, was fatally shot. The play is set in a courtroom and a prison cell during the autumn of 1917 and the dialogue is largely based on the extensive speeches made by Markievicz during this time. The audience are the jury. What will be the verdict?

Dr Ann Mathews is a critically-acclaimed playwright, author and professional historian. As well as Madame de Markievicz on Trial, she has written the historical drama Lockout (2013), and the books Renegades: Irish Republican Women, 1900-1922 (2010); Dissidents: Irish Republican Women 1922-1941 (2012) and The Kimmage Garrison: Making billycan bombs at Larkfield (2012). She is a history graduate of Maynooth University and an occasional lecturer in the Department of History. The History Department is most grateful to Ann for her support of this student-led venture.

The professional company, New Theatre, have recently toured Ireland with Madame de Markievicz on Trial (directed by Anthony Fox); the final performance in this tour was at the Centre Culturel Irlandais, Paris, on Saturday 23 April 2016, see: http://www.centreculturelirlandais.com/agenda/madame-de-markievicz-on-trial