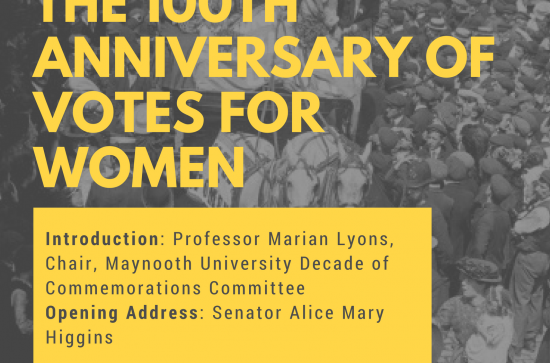 After a century of women’s votes what about political seats?
From the Irish times, Friday, 4 May

This year marks the centenary of the Representation of the People Act 1918 which gave the vote to all British and Irish men over 21 and women over 30 who met minimum property or education qualifications. Gender was no longer an absolute barrier to women’s electoral participation, but formal restrictions related to social class and age remained in place until 1922 when Irish women were enfranchised on par with men under the terms of the Irish Free State Constitution.

After a long battle for universal suffrage, first with the British government and later with the Irish Free State, Irish women exercised their right to vote in healthy numbers. Archival evidence including newspaper reports suggests that women voters were active in early Dáil Éireann elections and this continued into the 1930s and beyond, despite the increasing legislative and cultural obstacles to women’s participation in the public sphere.

One of the first opinion polls ever undertaken in the country, by Irish Marketing Surveys, shows that near-equal numbers of women and men voted in the 1969 general election. The overall picture of Irish voter turnout has been one of general decline since the 1980s (with a few exceptions), but survey research suggests that women and men continue to vote in generally equal numbers; where differences do emerge, they are statistically insignificant.

Gender gap
Unlike many other western democracies – and contrary to popular and even party-held beliefs about the existence of a “women’s vote” – there has never been a significant or sustained “gender gap” in voter support in the Republic of Ireland (at least since opinion polling began). The one exception to this is Sinn Féin which was consistently more popular with men than women voters, particularly younger men, but that gap has now all but closed. Deputy Mary Lou McDonald’s presidency is likely to further increase female support.

The overall picture of Irish voter turnout has been one of general decline since the 1980s (with a few exceptions), but survey research suggests that women and men continue to vote in generally equal numbers

Irish women have used their vote as effectively as men. But the suffragettes were not only concerned with the right of women to vote: many assumed that women’s candidacy and political representation on equal terms with men would naturally follow women’s enfranchisement. Perhaps a lesser-known fact is that November will mark the centenary of the Parliament (Qualification of Women) Act 1918, which gave British and Irish women over 21 the right to stand for national election. We should celebrate (and loudly) “votes for women” – but what about “seats for women”? How far have we come in 100 years?

The earliest indications were generally positive for women. In 1918, Constance Markievicz became the first woman MP (and subsequently TD) for Sinn Féin and in 1921 she was joined by another five women TDs. However, for a variety of political and socio-cultural reasons, women were soon “faded out” of politics in the Republic of Ireland. No general election between the 1930s and the early 1970s returned more than five female TDs at a time. In fact, there were more women TDs in 1923 (five) than in 1973 (four).

‘Allergic to women’
Writing in 1943, Hanna Sheehy-Skeffington’s strong words were fairly accurate considering how few women were nominated to run as candidates: “The party machine (true this of all parties) is still male and still allergic to women.” There was some improvement with the onset of second-wave feminists in the 1970s and women’s representation in Dáil Éireann reached an all-time high of 12 per cent in the 1992 general election. The level of growth hit a plateau over the next five general elections, reaching just 15 per cent in the “earthquake election” of 2011. The introduction of legislative gender quotas, with punitive financial sanctions for non-compliance, had a significant impact on women’s representation in the 2016 general election. Despite some concerns about where they would “find” the women, all political parties registered increases in their percentage of women candidates relative to 2011 and women won 35 or 22 per cent of seats – an increase of 40 per cent in one electoral cycle.

Nonetheless, there is no room for complacency (or much celebration, just yet). Men still account for four out of every five TDs. Women members of the Oireachtas (and councillors) have no entitlement to maternity leave. Sexism and misogyny still exist within the walls of Leinster House, in political parties and on the campaign trail – there are the stories that have come to light publicly and the stories that remain hidden.

These are just some of the barriers that remain in place for women in Irish politics in 2018. What better way to honour the suffragettes than to dismantle them, once and for all?

Claire McGing is based in the Social Sciences Institute and Department of Geography at Maynooth University. Her research focuses on women’s historical and contemporary representation in Irish politics

See also a live stream of the event  -  Commemorating the 100th Anniversary of Votes for Women, A Panel Discussion, please see link here.