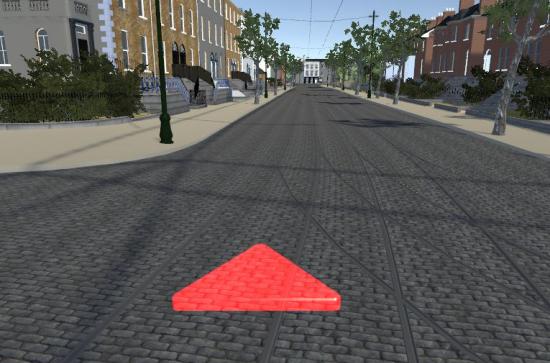 Researchers at Maynooth University and Trinity College Dublin, in conjunction with the Humanities Virtual Worlds Consortium and The Andrew W. Mellon Foundation, have developed a virtual world to allow researchers and members of the public a novel way to understand The Battle of Mount Street, one of the most seminal engagements of the 1916 Rising.  Contested Memories: The Battle of Mount Street Bridge provides a thoroughly annotated computer model of the site of action as it appeared during Easter 1916.

The Battle of Mount Street Bridge was, as historian Brian Hughes claims, militarily, the most successful rebel engagement in Dublin. Though eventually defeated, the rebels held up two nearly full-strength British battalions (some 1,750 soldiers) for several hours on Wednesday 26 April, and the significant British casualties inflicted by a small band of Volunteers served as a powerful piece of propaganda, emphasising the bravery and sacrifice of the rebellion.

Professor Susan Schreibman, the Director of the project explains that Contested Memories: The Battle of Mount Street Bridge was conceived of as a tool for investigating how the battle unfolded, including the number of casualties inflicted on British forces. The project employs a melding of traditional and digital research methods to create a new platform to investigate the battle.  The project team and collaborators include military historians, ballistic experts, architects, digital humanists, programmers, and virtual heritage specialists, as well as virtual world development from Dublin-based Noho.

The team pieced together a timeline of the battle, finding evidence for the buildings that were occupied, participant movements, and the weapons that they used. This traditional research was augmented by modern technology, including the use of Lidar scans along with period photographs for the digital reconstruction. Data about the firearms was acquired in order to create a well-informed recreation of bullets’ trajectories and guns’ sounds and reload rates. This data has been combined to test within the Humanities Virtual World Consortium‘s platform, both ‘canonical’ accounts of the engagement and new, rival hypotheses.

Maynooth University President, Professor Philip Nolan, observes: “This is an excellent demonstration of how the latest digital technology can transform the academic research process to create something new, illuminate a subject, and bring the past to life. It’s a kind of alchemy that happens when you bring people from a variety of fields together, and something to which Maynooth is wholly dedicated.”

The web-based final product, a combination of a Drupal-based content delivery system and a virtual world created in Autodesk’s 3DS Max and rendered with the Unity engine, allows users to virtually place themselves on Mount Street on 26 April, 1916. Users are able to read extensive annotations on the various participants and locations of the conflict while at the same time visually seeing how they different elements came together to create the battle as a whole.

Contested Memories is being launched at 7.15pm on Friday, 20 November 2015 by Brigadier General Michael Beary of the Irish Defence Forces at the Virtual Heritage Network Ireland Conference 2015, at Renehan Hall, Maynooth University. Read more about the project here.