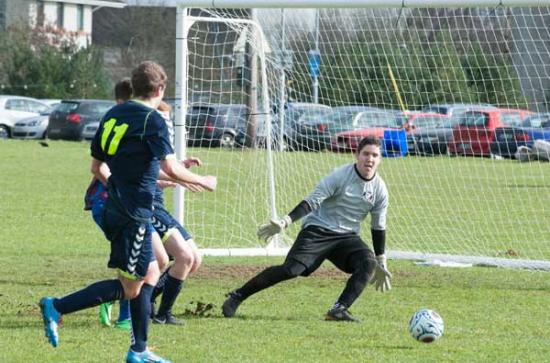 As expected St Pat's had a lot of possession in the first half with the Maynooth students needing to work extremely hard as a defensive unit to keep the visitors at bay. With the scoreline 0-0 at half time the Maynooth students seemed to grow in confidence resulting in an improved performance and encouraging passages of play in the early second half exchanges. As a result Maynooth University took the lead through a Seamus Doherty header from a corner mid way through the second period.

Conceding the goal seemed to spur St Pat's into action and they improved their game. St Pat's eventually ran out 2-1 winners with goals from Christy Fagan and Karl Bermingham.

After the game Barry Prenderville,  Soccer Development Officer at Maynooth University  said "We are very happy with the squads performance, playing against top opposition like St Patrick's Athletic first team squad and narrowly losing out 2-1 gives our guys great belief going into what is a tough tie against UCD at Belfield in the quarter final of the Collingwood Cup next Wednesday "

Good Luck to Barry and the lads!