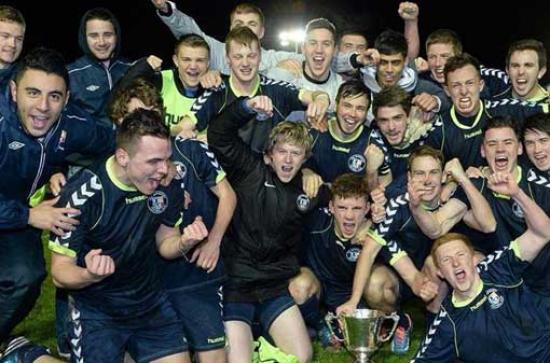 The Maynooth side really excelled themselves in this annual four day tournament, with several fine displays that saw them secure their win the hard way by defeating holder UCD and UCC, two of the pre-tournament favourites, on their way to a well-deserved success. While for NUI Galway it was disappointment once again as they now have tasted defeat in four of the past six Collingwood Cup finals.

Lanigan had Maynooth off to a dream start getting his head to a Conor Mahony cross from the left and brilliantly placed the ball well out of the reach of Galway ‘keeper Evan Duffy on five minutes. Galway were quickly on the offensive and Evan Boyce was close with a shot that went through the legs of Maynooth defender Daniel Campbell , but goalkeeper Nathan Murphy was alert to the danger and got a hand to it.

Niall Conran then responded for Maynooth and he tested Duffy with a fierce drive after cutting in from the left. While at the other end defender Eoin Hyland got back to clear an Evan Preston Kelly drive off the line and Sean Hoare was on hand to make a clearing tackle from Boyce in a hectic spell for Galway just before the break.

Early in the second half Conran got in on goal but his run halted when he crashed into Duffy. The Maynooth striker sustained an injury that resulted in him being replaced by former League of Ireland star Shane Barrett on 55 minutes. The turning point in the game came just over the hour mark following a Maynooth free on the right when full back Hyland got clear to fire over a dangerous cross and Mahony out-jumped the Galway defenders to head past Duffy for Maynooth’s second goal.

The Corribsiders continued to chase the game and the experienced Mikey Creane went close before he finally pulled a goal back with a well-placed drive from outside the box with 13 minutes remaining. But the Maynooth back four with central defender Sean Hoare, later named Player of the Tournament, outstanding, held firm and saw out the remaining minutes to take the famous old cup which was celebrating its centenary back to its new home in Maynooth.