Harrington Golf Scholar is leading amateur at the Irish Open 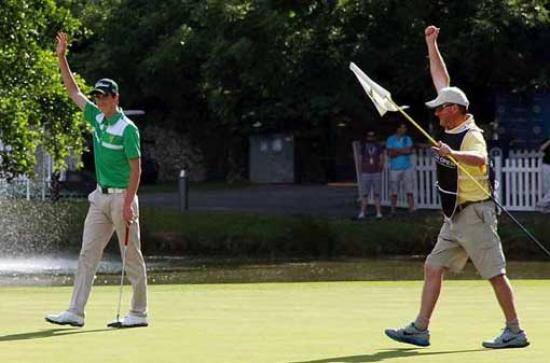 Maynooth University ’s golf scholar, Gary Hurley was placed as the top Irish amateur at the 2014 Irish Open at Fota Island. Hurley opened with a solid round of 72 (+1) to lie a single shot outside the cut mark but showed his class in round two by firing six birdies in a sensational round of five under 66 to go into the weekend tied for 16th place with the likes of defending champion Paul Casey on four under.

After enduring a rough ten over 81 in round three, Gary showed his character and regrouped to shoot a final round 73 to finish in a tie for 73rd place on a score of eight over.  Gary’s final stroke of the tournament was fitting and heard around the course by holing a 25 foot birdie putt on the 18th green in front of a sizeable group of supporters made up of his hometown Aglish, home club West Waterford and teammates from Maynooth University.

Subsequently, Gary has been selected to represent the six man Ireland team for the European Amateur Team Championship in Finland from July 8-12.

Gary has benefited from the Paddy Harrington Golf Scholarship at Maynooth University which is now viewed as one of the leading high performance University golf programmes in Europe.