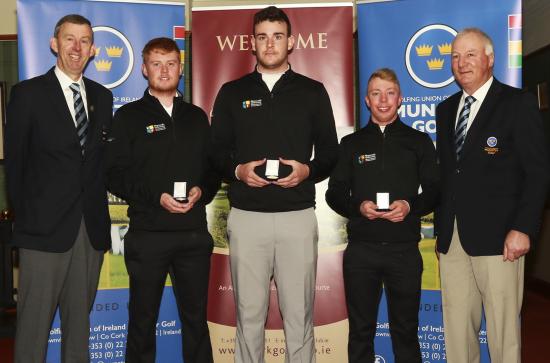 MU Scholars B Team win the team event at the Munster Students Championship!

MU Scholars B team of Cathal Butler, Eanna Griffin & Kyle McCarron clinched the team event by one stroke from Ulster A with a score of 285 (-3). The scholars trailed Ulster A by three shots after an opening round of 146 (+2) but rallied on day two posting 139 (-5). Cathal Butler lead the charge for the scholars on day two by firing a 68(-4) which included an eagle and six birdies with Eanna Griffin following up with a solid 71(-1). MU Golf Club A finished 3rd on 287(-1) with MU Women's taking 4th on 298(+2). Team results: https://goo.gl/p6rPZc